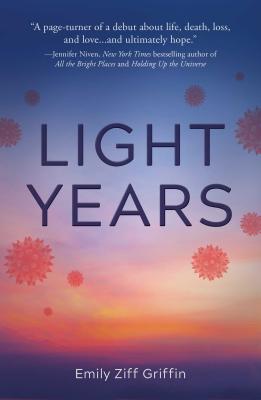 As a mysterious virus infects the world’s population, a girl embarks on a quest to find a cure in this thrilling debut from Emily Ziff Griffin.

Luisa is ready for her life to start. Five minutes ago. And she could be on her way, as her extraordinary coding skills have landed her a finalist spot for a fellowship sponsored by Thomas Bell, the world’s most brilliant and mercurial tech entrepreneur. Being chosen means funding, mentorship, and most importantly, freedom from her overbearing mother. Maybe Lu will even figure out how to control the rare condition that plagues her: whenever her emotions run high, her physical senses kick into overload, with waves of color, sound, taste, and touch flooding her body.

But Luisa’s life is thrust into chaos as a deadly virus sweeps across the globe, killing thousands and sending her father into quarantine. When Lu receives a cryptic message from someone who might hold the key to stopping the epidemic, she knows she must do something to save her family—and the world.

Suspenseful, lyrical, and thought-provoking, Light Years features a remarkable heroine on an intensely physical and emotional quest for hope and existential meaning.

“Light Years is searingly beautiful. A page-turner of a debut about life, death, loss, and love . . . and ultimately hope. Emily Ziff Griffin is an important new voice in YA fiction, and Light Years is an important book.”
— Jennifer Niven, New York Times bestselling author of All the Bright Places and Holding Up the Universe

“Light Years couldn’t be more timely. In the midst of so much chaos and strife, Griffin’s protagonist Luisa manages to feel, to hurt, to love, and, most important, to persevere. It is [A] beautiful story of grit and resilience, a potent reminder that when our own world seems to be crumbling, it’s up to us to make something of ourselves.”
— M.A. Larson, award-winning author of the Pennyroyal Academy series

"The intersection of spiritualism, physical health, and a global community creates an evocative message that hints at the butterfly effect one person can have. Griffin's near-future worldbuilding is stylish, immersive, and entirely plausible.... A supernatural romantic thriller that defies convention."
— Kirkus Reviews

“Light Years is a thrilling, thoughtful meditation on life and death.”
— Hello Giggles

The tone of Emily Ziff Griffin's novel is reminiscent of the works of Madeleine L'Engle—science meets contemporary life meets religion and faith. The first in what is likely to be a genre-bending series, Light Years is a well-paced read that is shockingly timely.
— Shelf Awareness

Emily Ziff Griffin lives in Los Angeles, where she writes, produces, teaches, daydreams, and mothers two young kids. When she was twenty-five, she cofounded Cooper’s Town Productions with Philip Seymour Hoffman and produced the Academy Award–winning film Capote, along with Hoffman’s directorial debut Jack Goes Boating, and John Slattery’s God’s Pocket. She’s run three marathons, slowly, and holds a degree from Brown University in art-semiotics, the study of how images make meaning. She believes children are way more sophisticated than adults typically give them credit for and writes for the teenager who is ready to claim their own worldview and be grounded in their own power. Light Years is her first novel. Find her at EmilyZiffGriffin.com.
Loading...
or
Not Currently Available for Direct Purchase