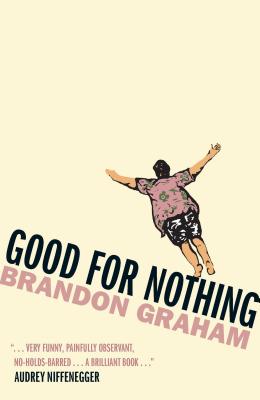 "Enchanted by Good For Nothing..." --Stephen Fry

"This book could be the lovechild of Bill Bryson and Martin Amis.... But at its heart is a very serious point. It is about the tsunami of destruction that has hit Middle America since the financial crisis." --Daily Mail

Flip Mellis believes his recent past would be best described as: a man with his feet planted on terra firma. As a husband and father, he was a consistent breadwinner. As a business professional, he was a go-getter. For twenty years, he did all that was expected of him, if not much more.

But a job loss in his middle years, in the midst of a national economic crisis, has knocked Flip squarely on his big, soft ass, where he has been wallowing for nearly a year.

Over the course of one hectic week, replete with a cast of colorful characters, Flip is forced by circumstances of his own invention to finally get his life headed in the right direction. Like a pudgy, irritable toddler, he carefully tests his balance and lurches forward, stumbling around absurd obstacles and grasping for any solid purchase. Ultimately a spark of human resilience locked deep within his core begins to spread. The question becomes: will Flip's best efforts be enough to lead him safely to redemption or will they merely lead to a futile, purely graceless, and quixotic crash?

Brandon S. Graham is a Southerner by birth and has lived in eight states and four countries, receiving three university degrees. He worked as a commercial pressman and an adjunct professor in Missouri and as a gallery director in Nebraska. He studied in Budapest, Hungary and Dijon, France, with a summer spent as a barman in England. He eventually settled near Chicago, where he studied visual and written narrative at Columbia College for Book and Paper Arts, graduating with his MFA in 2008. He is the author of Missing People.
or
Not Currently Available for Direct Purchase