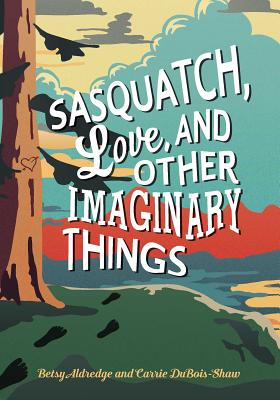 Sasquatch, Love, and Other Imaginary Things

Pride and Prejudice meets Animal Planet’s Finding Bigfoot in this humorous and heartfelt debut about a loving, quirky family on the hunt for the mythical Sasquatch.

Hunting for monsters was never so awkward.

It’s bad enough that Samantha’s parents, charter members of the Northern Ohio Bigfoot Society, have dragged their daughter around forever, hunting for yetis. But now they’re doing it on national TV, and worse, in front of an aristocratic prep-school crew including a boy who disdains Samantha’s family.

But when he scorns her humble Ohio roots, she becomes determined to take him down. As they go to war, their friction and attraction almost distract them from the hint that Sasquatch may actually be out there somewhere…

Praise For Sasquatch, Love, and Other Imaginary Things…

The most hilarious, charming, feminist Sasquatch-hunting book ever to grace a bookshelf.
— Alison Cherry, author of For Real

I fell head over Bigfooted heels for this delightfully quirky and downright hilarious debut! Sasquatch, Love, And Other Imaginary Things will have you believing in adorkably ever afters and more.

Everything you want in a Jane Austen retelling: reality TV, Sasquatch sightings, and young love at odds.
— Stephanie Scott, author of Alterations, a 2017 RITA® Award Finalist

An original, magnetic, and endearing debut seamlessly spun by two sharp new voices. Fans of nature, Austen, family, reality TV and Wood Apes will devour this story (that basically means everyone. Yes, I mean you. Stop reading my raving--get to reading this book already).
— Lindsey Leavitt, author of GOING VINTAGE

Betsy Aldredge is a former magazine editor turned communications professional. After having served as Director of Media Relations at the Museum of Jewish Heritage for several years, she is now in charge of media relations for Purchase College, State University of New York. She is the coauthor of Sasquatch, Love, and Other Imaginary Things.

Carrie DuBois-Shaw is an arts administrator who has had two plays for young audiences produced in New York City and spearheaded the new work development program at The New Victory Theater, a performing arts venue in Times Square dedicated to engaging and entertaining kids and families. She recently relocated to San Francisco and currently works in fundraising at the San Francisco Ballet and volunteers for the San Francisco Writers Conference and San Francisco Dance Film Festival. She is the coauthor of Sasquatch, Love, and Other Imaginary Things.
Loading...
or
Not Currently Available for Direct Purchase