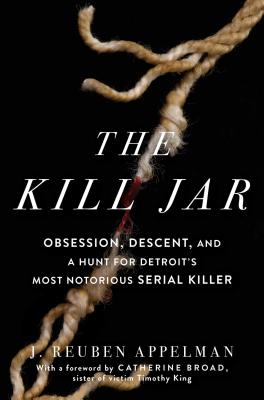 Obsession, Descent, and a Hunt for Detroit's Most Notorious Serial Killer

Enthralling. Gripping. Cinematic. Raw. A cold case murder investigation paced like a podcast, as visually stunning as a film, and as brave and personal as our darkest memoirs. J. Reuben Appelman cracks open one of America’s most notorious murder sprees while simultaneously banging the gavel on his own history with violence. A deftly-crafted true crime story with grit, set amid the decaying sprawl of Detroit and its outliers.

With a foreword by Catherine Broad, sister of victim Timothy King.

Four children were abducted and murdered outside of Detroit during the winters of 1976 and 1977, their bodies eventually dumped in snow banks around the city. J. Reuben Appelman was six years old at the time the murders began and had evaded an abduction attempt during that same period, fueling a lifelong obsession with what became known as the Oakland County Child Killings.

Autopsies showed the victims to have been fed while in captivity, reportedly held with care. And yet, with equal care, their bodies had allegedly been groomed post-mortem, scrubbed-free of evidence that might link to a killer. There were few credible leads, and equally few credible suspects. That’s what the cops had passed down to the press, and that’s what the city of Detroit, and J. Reuben Appelman, had come to believe.

When the abductions mysteriously stopped, a task force operating on one of the largest manhunt budgets in history shut down without an arrest. Although no more murders occurred, Detroit and its environs remained haunted. The killer had, presumably, not been caught.

Praise For The Kill Jar: Obsession, Descent, and a Hunt for Detroit's Most Notorious Serial Killer…

“A powerful, confident voice in the new true-crime memoir genre. There comes a moment when the reader realizes this is not a search for a killer of children but a search for a cult of dangerous and powerful men and it shakes you to the core.”
— James Renner, author of True Crime Addict: How I Lost Myself in the Mysterious Disappearance of Maura Murray

“A true crime story in the best possible sense, where chapter by chapter we converge on a surprising and unimaginable truth... Always deft, often sublime, Appelman uses his investigation to draw us into his personal journey through darkness, to light and life.”
— Chip Johannessen, Executive Producer of Dexter and Homeland

“J. Reuben Appelman becomes both Virgil and Dante, leading us through his own dark history and the history of his city while making the almost unbearably honest, compulsive demands of a roadside accident. Although The Kill Jar can be painful to gaze at, it is far more dangerous to look away.”
— Michael Hoffman, Director of The Best of Me, A Midsummer Night’s Dream and The Last Station

"J. Reuben Appelman not only expertly unfurls the sordid and fascinating tale of the O.C.C.K. case, but with poetic light also reveals the truth of violence, longing, and imperfect depravity in the human condition. The Kill Jar is completely edifying and endlessly thrilling."
— Alan Heathcock, author of VOLT and 40

“Appelman’s pathos is visceral and cathartic… his investigative work into this dark, twisted case is remarkably thorough and perceptive."
— Publishers Weekly

“An intimate entry into the true crime genre.”
— Boise Weekly

“For those with the stomach for human depravity, The Kill Jar is a must-read… a well-written examination of life’s morbid underground.”


— The New York Journal of Books

J. Reuben Appelman is a screenwriter, author in multiple genres, and two-time State of Idaho Literature Fellow, funded by the National Endowment for the Arts. His film industry work includes the feature documentaries, Playground and Jens Pulver | Driven, as well as several produced screenplays. His investigative writing and research, focused on issues of commercial sexual exploitation, child endangerment, and criminality and law enforcement, have earned him an ongoing spot as special lecturer on the issue of Human Trafficking for the Honor’s College at Boise State University. He works as a private investigator.
Loading...
or
Not Currently Available for Direct Purchase