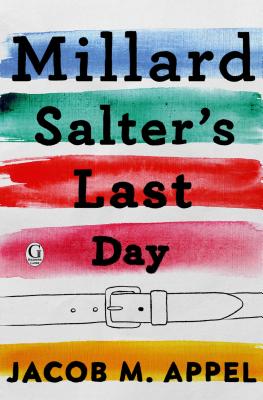 In the spirit of the New York Times bestselling A Man Called Ove, this is the heartwarming story of a man who decides to end his life before he’s too old—but then begins to reconsider when he faces complications from the world around him.

In an effort to delay the frailty and isolation that comes with old age, psychiatrist Millard Salter decides to kill himself by the end of the day—but first he has to tie up some loose ends. These include a tête-à-tête with his youngest son, Lysander, who at forty-three has yet to hold down a paying job; an unscheduled rendezvous with his first wife, Carol, whom he hasn’t seen in twenty-seven years; and a brief visit to the grave of his second wife, Isabelle. Complicating this plan though is Delilah, the widow with whom he has fallen in love in the past few months. As Millard begins to wrap up his life, he confronts a lifetime of challenges during a single day—and discovers that his family has a big surprise for him as well.

"The author has a gift for schtick — above all, Jewish New York City schtick. And in spite of Salter’s claim to being in a profound funk, when all is said and done, the man is full of life."
— The Associated Press

"The author is clever — coy, even — in how he treats the reader. He has Salter tease us. Thus, our protagonist can be exceedingly comical, careening from innermost stream of consciousness to conversations with workaday hospital colleagues to quirky, lovable family and friends."
— The Associated Press

"The more we get to know Millard Salter, the more we want him to live."
— The Associated Press

Jacob M. Appel is the author of many novels and short story collections including The Man Who Wouldn’t Stand Up, Scouting for the Reaper, Phoning Home, Einstein’s Beach House, and Millard Salter’s Last Day. His short fiction has appeared in many literary journals including Agni, Colorado Review, Gettysburg Review, and more. His prose has won many awards including the Boston Review Short Fiction Competition and the William Faulkner-William Wisdom Award. His stories have also been shortlisted for the O. Henry Award and the Best American Short Stories. He has taught most recently at Brown University, at the Gotham Writers’ Workshop in New York City, and at Yeshiva College, where he was the writer-in-residence. His essays have appeared in The New York Times, Chicago Tribune, Detroit Free Press, Orlando Sentinel, The Providence Journal, and many regional newspapers.
Loading...
or support indie stores by buying on