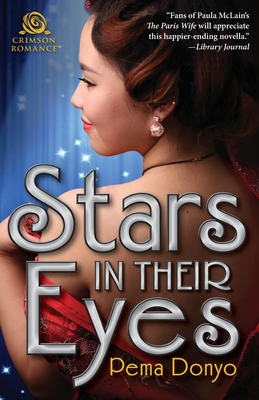 Stars in Their Eyes

This beautifully sweeping story of dueling ambitions and restless hearts in the roaring twenties will captivate fans who loved the romance of the Oscar-winning film La La Land and Paula McLain's bestselling novel The Paris Wife.

The bohemian salons and wild cabarets of 1920s Paris are just the place for Owen Matthews to pursue his writing and make the right connections in the literary scene. But six years after leaving Los Angeles and the love of his life, he still strives for success. Penning a new screenplay for his friend’s film might just help keep the lights on a bit longer in the City of Lights.

Iris Wong is used to sacrifice and rejection as an Asian-American actress. She’s determined to take full advantage of her new leading role in a Parisian silent film—and the director’s romantic interest in her. Playing the game almost guarantees she’ll be able to break through the industry’s racism and become the silver screen star she’s dreamed of being since she earned her first nickel as a Hollywood extra.

When these two star-crossed lovers unexpectedly reunite, they get a second chance to reconcile their hearts’ desires with their dreams of fame and fortune.

Pema Donyo lives in sunny Southern California, where she balances plotting her next novel and watching too many Bollywood movies. Find Pema Donyo at PemaDonyo.wordpress.com, and on Twitter @PemaDonyo.
Loading...
or support indie stores by buying on