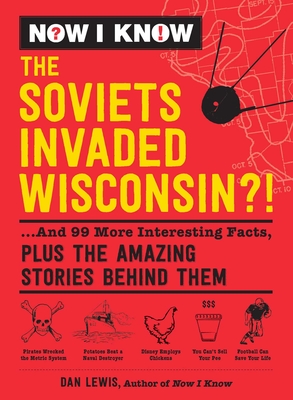 The Soviets Invaded Wisconsin?!: ...And 99 More Interesting Facts, Plus the Amazing Stories Behind Them

A brand-new collection of fascinating facts spanning history and sports to science and pop culture that will have you proudly stating, “Now I know!”

Did you know that a measles outbreak led to the assigning of phone numbers? How about the fact that pirates are the reason we don’t use the metric system in the United States? Or that there’s actually a reason why stepping on a LEGO hurts so damn much?

Now I Know: Soviets Invaded Wisconsin?! is the ultimate challenge for even the biggest trivia buff. From the time a tomato plant stood up to a volcano to Portland’s great garbage battle of 2002, this book will put your general knowledge to the test and explain the most fascinating stories behind the world’s greatest facts.

Based on the very popular newsletter, you are guaranteed to learn something new despite how much you already think you know. Covering 100 topics, Now I Know: Soviets Invaded Wisconsin?! will surprise any know-it-all who thinks they have nothing new to learn.

Praise For Now I Know: The Soviets Invaded Wisconsin?!: ...And 99 More Interesting Facts, Plus the Amazing Stories Behind Them…

“If you’re looking for a way to avoid political discussions with your relatives this Thanksgiving and give folks a heavy does of random knowledge, you need a copy.”

“To whom is a book of historical tidbits/significant trivia important? Frankly, the answer is all those who wish to know something about the unexpected details that unite our world in pertinent ways. … One of the best I have ever seen in this category of writing.”

Dan Lewis is a father, husband, Mets fan, lawyer, and trivia buff. He writes a daily email called “Now I Know,” which began in 2010 with twenty subscribers and now boasts more than 125,000. He’s a proud graduate of Tufts University and the Benjamin N. Cardozo School of Law. You can sign up for his newsletter at NowIKnow.com.
Loading...
or
Not Currently Available for Direct Purchase