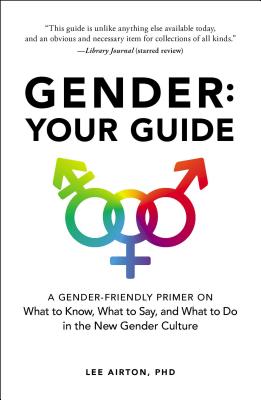 Your Guide: A Gender-Friendly Primer on What to Know, What to Say, and What to Do in the New Gender Culture

“An invaluable resource for both new and veteran allies…obvious and necessary” (Library Journal, starred review) information for everyone who wants to learn more about how to navigate gender diversity in today’s families, communities, and workplaces.

The days of two genders—male, female; boy, girl; blue, pink—are over, if they ever existed at all. Gender is now a global conversation, and one that is constantly evolving. More people than ever before are openly living their lives as transgender men or women, and many transgender people are coming out as neither men nor women, instead living outside of the binary. Gender is changing, and this change is gaining momentum.

We all want to do and say the right things in relation to gender diversity—whether at a job interview, at parent/teacher night, and around the table at family dinners. But where do we begin?

From the differences among gender identity, gender expression, and sex, to the use of gender-neutral pronouns like singular they/them, to thinking about your own participation in gender, Gender: Your Guide serves as “a warm, inviting guide to a complicated area” (The Globe and Mail, Toronto). Professor and gender diversity advocate Lee Airton, PhD, explains how gender works in everyday life; how to use accurate terminology to refer to transgender, non-binary, and/or gender non-conforming individuals; and how to ask when you aren’t sure what to do or say. It provides the information you need to talk confidently and compassionately about gender diversity, whether simply having a conversation or going to bat as an advocate.

Just like gender itself, being gender-friendly is a process for all of us. As revolutionary a resource as Our Bodies, Ourselves, Gender: Your Guide is “greatly needed…an impactful tool for creating a world more supportive of people of all genders” (INTO! Magazine).

Lee Airton, PhD, is assistant professor of gender and sexuality studies in education at Queen's University in Kingston, Ontario. They are a frequent keynote speaker and media commentator and are regularly asked to consult on gender-neutral language and gender diversity issues in relation to media, policy, and education. They founded TheyIsMyPronoun.com, a blog on gender-neutral pronoun usage and user support in 2012 and the No Big Deal Campaign (NBDCampaign.ca) in 2016. Learn more at LeeAirton.com.

Praise For Gender: Your Guide: A Gender-Friendly Primer on What to Know, What to Say, and What to Do in the New Gender Culture…

"This guide is unlike anything else available today, and an obvious and necessary item for collections of all kinds."

"Lee Airton’s book ‘Gender: Your Guide’ is a vital resource toward understanding and inclusiveness.... A must-have for everyone, and not only those who are trans, gender non-conforming or non-binary—or who have someone trans in their life."

"What I like most about how the author writes is how they combine their knowledge about gender, language and identity with a warm and caring tone. I feel like Airton is both my smartest and best friend on this subject matter."

"A helpful primer for those who need help negotiating gender situation and issue at work, in a social situation, and within their families. … The book may just change your thinking and the way you deal with gender diversity."