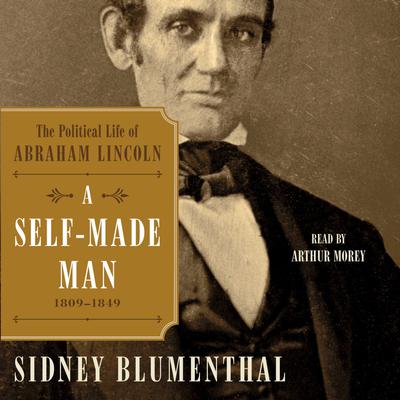 The first in a sweeping, multi-volume history of Abraham Lincoln—from his obscure beginnings to his presidency, death, and the overthrow of his post-Civil War plan of reconciliation—“engaging and informative and…thought-provoking” (The Christian Science Monitor).

From his youth as a voracious newspaper reader, Abraham Lincoln became a free thinker, reading Tom Paine, as well as Shakespeare and the Bible. In the “fascinating” (Booklist, starred review) A Self-Made Man, Sidney Blumenthal reveals how Lincoln’s antislavery thinking began in his childhood in backwoods Kentucky and Indiana. Intensely ambitious, he held political aspirations from his earliest years. Yet he was a socially awkward suitor who had a nervous breakdown over his inability to deal with the opposite sex. His marriage to the upper class Mary Todd was crucial to his social aspirations and his political career. “The Lincoln of Blumenthal’s pen is…a brave progressive facing racist assaults on his religion, ethnicity, and very legitimacy that echo the anti-Obama birther movement….Blumenthal takes the wily pol of Steven Spielberg’s Lincoln and Doris Kearns Goodwin’s Team of Rivals and goes deeper, finding a Vulcan logic and House of Cards ruthlessness” (The Washingtonian).

Based on prodigious research of Lincoln’s record, and of the period and its main players, Blumenthal’s robust biography reflects both Lincoln’s time and the struggle that consumes our own political debate. This first volume traces Lincoln from his birth in 1809 through his education in the political arts, rise to the Congress, and fall into the wilderness from which he emerged as the man we recognize as Abraham Lincoln. “Splendid…no one can come away from reading A Self-Made Man…without eagerly anticipating the ensuing volumes.” (Washington Monthly).
Loading...