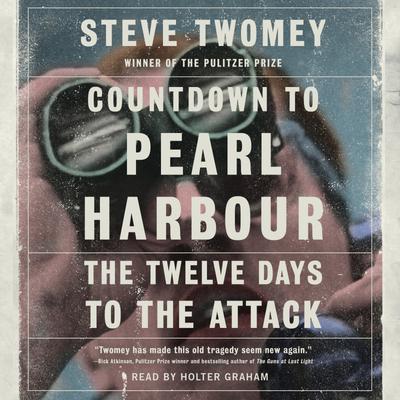 In this “riveting” (Los Angeles Times) account of the days leading up to the attack on Pearl Harbor, Pulitzer Prize-winning journalist Steve Twomey “infuses a well-known story with suspense” (The New York Times Book Review), offering a poignant new perspective on the most infamous day in American history.

In Washington, DC, in late November 1941, admirals composed the most ominous message in Navy history to warn Hawaii of possible danger—but they wrote it too vaguely. They thought precautions were being taken, but never checked to be sure.

In a small office at Pearl Harbor, overlooking the battleships, the commander of the Pacific Fleet tried to assess whether the threat was real. His intelligence had lost track of Japan’s biggest aircraft carriers, but assumed they were resting in a port far away. Besides, the admiral thought Pearl was too shallow for torpedoes; he never even put up a barrier. As he fretted, a Japanese spy was counting warships in the harbor and reporting to Tokyo.

There were false assumptions and racist ones, misunderstandings, infighting, and clashes between egos. Through remarkable characters and impeccable details, Pulitzer Prize–winner Steve Twomey shows how careless decisions and blinkered beliefs gave birth to colossal failure. But he tells the story with compassion and a wise understanding of why people—even smart, experienced, talented people—look down at their feet when they should be scanning the sky.

The brilliance of Countdown to Pearl Harbor is in its elegant prose and taut focus. “Even though readers already know the ending, they’ll hold their collective breath, as if they’re watching a rerun of an Alfred Hitchcock classic” (St. Louis Post-Dispatch).
Loading...