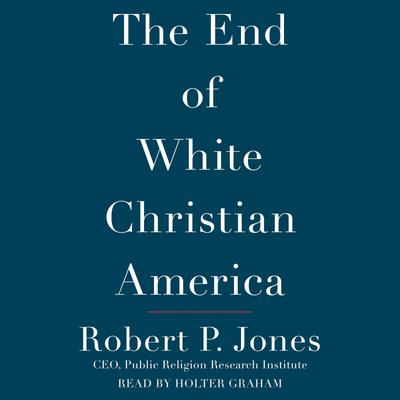 Winner of the 2019 Grawemeyer Award in Religion

Robert P. Jones, CEO of the Public Religion Research Institute, spells out the profound political and cultural consequences of a new reality—that America is no longer a majority white Christian nation. “Quite possibly the most illuminating text for this election year” (The New York Times Book Review).

For most of our nation’s history, White Christian America (WCA) set the tone for our national policy and shaped American ideals. But especially since the 1990s, WCA has steadily lost influence, following declines within both its mainline and evangelical branches. Today, America is no longer demographically or culturally a majority white, Christian nation.

Drawing on more than four decades of polling data, The End of White Christian America explains and analyzes the waning vitality of WCA. Robert P. Jones argues that the visceral nature of today’s most heated issues—the vociferous arguments around same-sex marriage and religious and sexual liberty, the rise of the Tea Party following the election of our first black president, and stark disagreements between black and white Americans over the fairness of the criminal justice system—can only be understood against the backdrop of white Christians’ anxieties as America’s racial and religious topography shifts around them.

Beyond 2016, the descendants of WCA will lack the political power they once had to set the terms of the nation’s debate over values and morals and to determine election outcomes. Looking ahead, Jones forecasts the ways that they might adjust to find their place in the new America—and the consequences for us all if they don’t. “Jones’s analysis is an insightful combination of history, sociology, religious studies, and political science….This book will be of interest to a wide range of readers across the political spectrum” (Library Journal).
Loading...