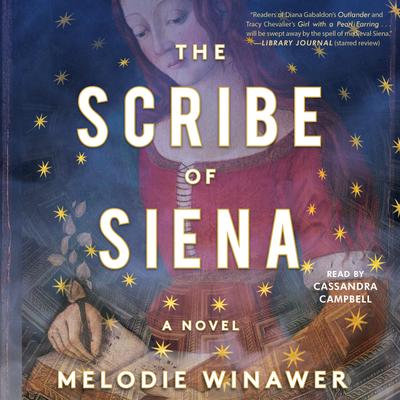 The Scribe of Siena (Digital Audiobook)

“Will remind historical fiction readers of Diana Gabaldon’s Outlander and Tracy Chevalier’s Girl with a Pearl Earring…Lovers of meticulously researched historical fiction and time-travel narratives will be swept away by the spell of medieval Siena” (Library Journal, starred review).

“Winawer’s debut is a detailed historical novel, a multifaceted mystery, and a moving tale of improbable love…Winawer has created a prodigious, vibrant tale of past and present that transports readers and fills in the historical gaps. This is a marvelous work of research and invention” (Publishers Weekly, starred review)

After uncovering the journal and paintings of Gabriele Accorsi, the fourteenth-century artist at the heart of the plot, Beatrice finds a startling image of her own face and is suddenly transported to the year 1347. She awakens in a Siena unfamiliar to her, one that will soon be hit by the Plague.