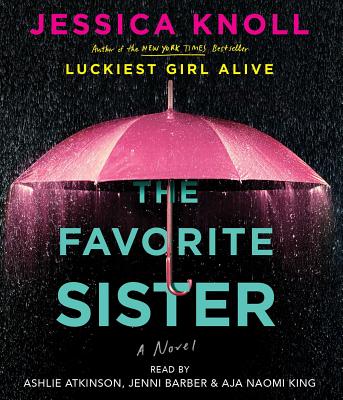 NO ONE EVER SUSPECTS THE GOOD ONE.

Brett and Kelly have always toed the line between supportive sisters and bitter rivals. Growing up, Brett was the problem child, in the shadow of the brilliant and beautiful Kelly. In adulthood, all that has changed. Kelly is a struggling single mother and Brett has skyrocketed to such meteoric success, which has been chronicled on a reality TV show called Goal Diggers.

When Kelly manipulates herself onto the show and into Brett’s world, Brett is right to be threatened. Kelly, and only Kelly, knows her younger sister's appalling secret, and it could ruin her.

EARLY PRAISE FOR THE FAVORITE SISTER BY JESSICA KNOLL

“Knife-sharp and enthralling, Jessica Knoll’s The Favorite Sister is as bold and smart and audacious a novel about women and ambition as you could hope for. A more-than-worthy follow-up to Luckiest Girl Alive, it proves Knoll is a literary force to be reckoned with.”—Megan Abbott, New York Times bestselling author of You Will Know Me
or
Not Currently Available for Direct Purchase
Copyright © 2020 American Booksellers Association