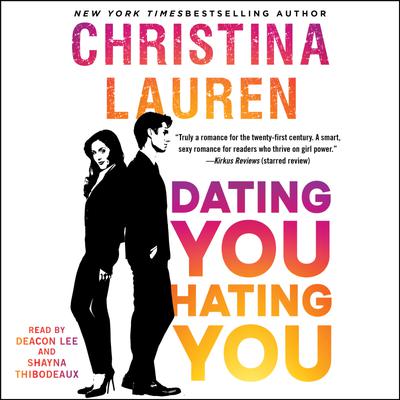 Dating You / Hating You (Digital Audiobook)

Everyone knows that all’s fair in love and war. But these two will learn that sabotage is a dish best served naked.

A sexy, compulsively readable romantic comedy that dives headlong into the thrill and doubt of modern love, Dating You/Hating You by New York Times bestselling author Christina Lauren is the story of what two high-powered agents will—and won’t—do to get everything they ever wanted.

Despite the odds against them from an embarrassing meet-awkward at a mutual friend’s Halloween party, Carter and Evie immediately hit it off. Even the realization that they’re both high-powered agents at competing firms in Hollywood isn’t enough to squash the fire.

But when their two agencies merge—causing the pair to vie for the same position—all bets are off. What could have been a beautiful, blossoming romance turns into an all-out war of sabotage. Carter and Evie are both thirtysomething professionals—so why can’t they act like it?

Can Carter stop trying to please everyone and see how their mutual boss is really playing the game? Can Evie put aside her competitive nature long enough to figure out what she really wants in life? Can their actor clients just be something close to human? Whether these two Hollywood love/hatebirds get the storybook Hollywood ending, or just a dramedy of epic proportions, you get to enjoy Christina Lauren’s heartfelt, hilarious story of romance in the modern world.
Loading...