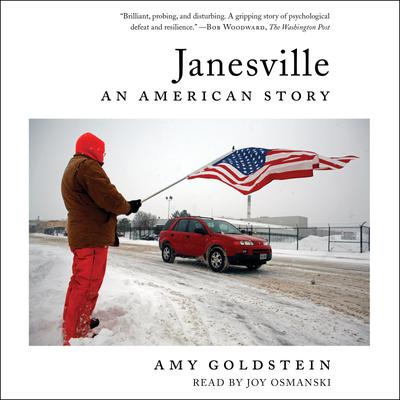 “A gripping story of psychological defeat and resilience” (Bob Woodward, The Washington Post)—an intimate account of the fallout from the closing of a General Motors assembly plant in Janesville, Wisconsin, and a larger story of the hollowing of the American middle class.

This is the story of what happens to an industrial town in the American heartland when its main factory shuts down—but it’s not the familiar tale. Most observers record the immediate shock of vanished jobs, but few stay around long enough to notice what happens next when a community with a can-do spirit tries to pick itself up.

Pulitzer Prize–winning reporter Amy Goldstein spent years immersed in Janesville, Wisconsin, where the nation’s oldest operating General Motors assembly plant shut down in the midst of the Great Recession. Now, with intelligence, sympathy, and insight into what connects and divides people in an era of economic upheaval, Goldstein shows the consequences of one of America’s biggest political issues. Her reporting takes the reader deep into the lives of autoworkers, educators, bankers, politicians, and job re-trainers to show why it’s so hard in the twenty-first century to recreate a healthy, prosperous working class.

“Moving and magnificently well-researched...Janesville joins a growing family of books about the evisceration of the working class in the United States. What sets it apart is the sophistication of its storytelling and analysis” (Jennifer Senior, The New York Times).

“Anyone tempted to generalize about the American working class ought to meet the people in Janesville. The reporting behind this book is extraordinary and the story—a stark, heartbreaking reminder that political ideologies have real consequences—is told with rare sympathy and insight” (Tracy Kidder, Pulitzer Prize–winning author of The Soul of a New Machine).
Loading...