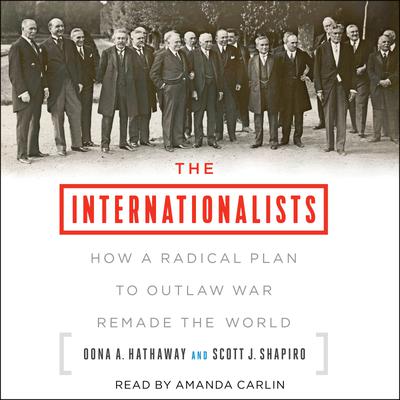 “An original book…about individuals who used ideas to change the world” (The New Yorker)—the fascinating exploration into the creation and history of the Paris Peace Pact, an often overlooked but transformative treaty that laid the foundation for the international system we live under today.

In 1928, the leaders of the world assembled in Paris to outlaw war. Within the year, the treaty signed that day, known as the Peace Pact, had been ratified by nearly every state in the world. War, for the first time in history, had become illegal. But within a decade of its signing, each state that had gathered in Paris to renounce war was at war. And in the century that followed, the Peace Pact was dismissed as an act of folly and an unmistakable failure. This book argues that the Peace Pact ushered in a sustained march toward peace that lasts to this day.

A “thought-provoking and comprehensively researched book” (The Wall Street Journal), The Internationalists tells the story of the Peace Pact through a fascinating and diverse array of lawyers, politicians, and intellectuals. It reveals the centuries-long struggle of ideas over the role of war in a just world order. It details the brutal world of conflict the Peace Pact helped extinguish, and the subsequent era where tariffs and sanctions take the place of tanks and gunships.

The Internationalists is “indispensable” (The Washington Post). Accessible and gripping, this book will change the way we view the history of the twentieth century—and how we must work together to protect the global order the internationalists fought to make possible. “A fascinating and challenging book, which raises gravely important issues for the present…Given the state of the world, The Internationalists has come along at the right moment” (The Financial Times).
Loading...