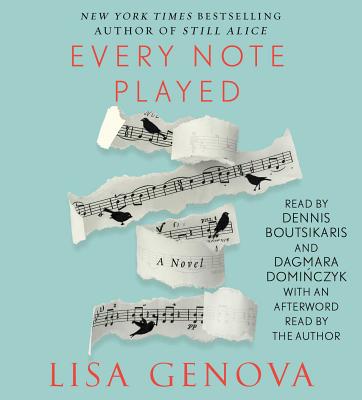 Acclaimed as the Oliver Sacks of fiction and the Michael Crichton of brain science, Lisa Genova is the New York Times bestselling author of Still Alice, Left Neglected, Love Anthony, and Inside the O’Briens. Still Alice was adapted into an Oscar-winning film starring Julianne Moore, Alec Baldwin, and Kristen Stewart. Lisa graduated valedictorian from Bates College with a degree in biopsychology and holds a PhD in neuroscience from Harvard University. She travels worldwide speaking about the neurological diseases she writes about and has appeared on The Dr. Oz Show, Today, PBS NewsHour, CNN, and NPR. Her TED talk, What You Can Do To Prevent Alzheimer's, has been viewed over 2 million times.


Dennis Boutsikaris won an OBIE Award for his performance in Sight Unseen and played Mozart in Amadeus on Broadway. Among his films are *batteries not included, The Dream Team, and Boys On the Side. His many television credits include And Then There Was One, Chasing the Dragon and 100 Center Street.

Dagmara Dominczyk's film credits are Rock Star, The Count of Monte Cristo, Kinsey, and Lonely Hearts. On television she's appeared in Five People You Meet in Heaven, and 24. Her Broadway appearences are Closer, Enchanted April, and The Violet Hour.
Loading...
or
Not Currently Available for Direct Purchase