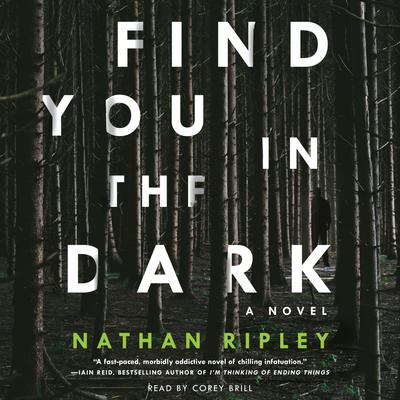 Find You in the Dark (Digital Audiobook)

In this “fast-paced, morbidly addictive novel of chilling infatuation” (Iain Reid, bestselling author of I’m Thinking of Ending Things)—perfect for fans of Caroline Kepnes’s Hidden Bodies and Jeff Lindsay’s Dexter series—a family man with a habit of digging up the past catches the attention of a serial killer who is determined to keep his secrets uncovered.

For years, unbeknownst to his wife and teenage daughter, Martin Reese has been illegally buying police files on serial killers and obsessively studying them, using them as guides to find the missing bodies of victims. He doesn’t take any souvenirs, just photos that he stores in an old laptop, and then he turns in the results anonymously. Martin sees his work as a public service, a righting of wrongs.

Detective Sandra Whittal sees the situation differently. On a meteoric rise in police ranks due to her case‑closing efficiency, Whittal is suspicious of the mysterious source she calls the Finder, especially since he keeps leading the police right to the bodies. How can he know where all these bodies are located if he’s not the one putting them there?

On his latest dig, Martin searches for the first kill of Jason Shurn, the early 1990s murderer who may have been responsible for the disappearance of his wife’s sister. But when he arrives at the site, he finds more than just bones. There’s a freshly killed body—a young and missing Seattle woman—lying there. Someone else knew where Jason Shurn left the corpses of his victims…and that someone isn’t happy that Martin has been going around digging up his work. And when a crooked cop with a tenuous tie to Martin vanishes, Whittal begins to zero in on the Finder.

“A wickedly smart thriller that manages to be both chilling and wry” (Amy Stuart, bestselling author of Still Mine), Find You in the Dark will haunt you long after you turn the final page.
Loading...