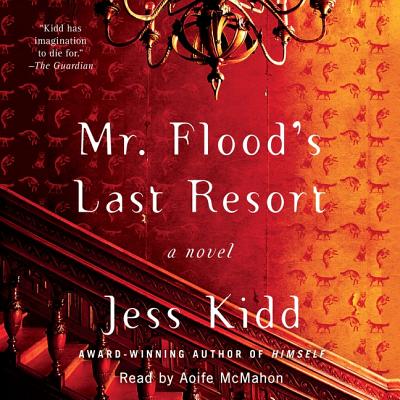 “Jess Kidd has done it again. I absolutely loved her first book, Himself, and her latest does not disappoint. This tale of Mr. Flood and his caregiver, Maud, brings together eccentric characters, ghosts, saints, a crumbling mansion, missing children, and a suspicious suicide. It perfectly balances tragedy with dark comedy; the dialogue crackles and every detail enchants. I will miss spending time in Maud's world.”
— Kathi Kirby, Powell's Books, Inc, Portland, OR
View the List

“Move over Ove, there is a new cranky old man in town. And what a feat of imagination is Mr. Cathal Flood! Swathed in layers of cardigans, he lives in a vast estate populated by cats and a pet fox named Larkin, where rooms of antique taxidermy and Victorian curiosities are barricaded by walls of ancient National Geographics and family mysteries abound. Into this situation comes Maud, a caretaker with secrets of her own and several saints literally watching over her. Magical and joyous, beautifully inventive, with sparkling dialogue and the perfect balance between dark humor and heartfelt sorrow, this book proclaims Jess Kidd (author of Himself) as a writer to cheer.”
— Yvette Olson, Magnolia's Bookstore, Seattle, WA
View the List

From the award-winning author of the supernaturally skillful debut (Vanity Fair) Himself, a spellbinding romp about a caretaker and a cranky hoarder with a secret-complete with skulking saints, unresolved disappearances, greedy heirs, and a firecracker neighbor determined to get to the bottom of it all.

Maud Drennan is a dedicated caretaker, but her sunny, capable disposition and snappy quips mask a deep sadness. A tragic childhood event left her in the company of a cast of patron saints who pop in and out of her life like unwelcome tourists. She tries to find solace in her hard work in London...but then she meets the inimitable Mr. Flood.

A menace by all accounts, Cathal Flood is a widower living alone in a Gothic Dorset mansion crawling with collector's items and feral cats. Stubborn as anything and an extreme hoarder, he has been battling his son's attempts to move him into an old age home, and rumor has it he sent his last caretaker to the madhouse.

But Maud is this insolent old man's last chance: if she can help him get the house in order, he might be able to fend off the deportation. So the unlikely pair begin to cooperate, connecting over their shared love of folk tales and their suspicion of Gabriel, Cathal's overbearing son. Still, shadows are growing in the cluttered corners of the mansion, hinting at buried family secrets, and reminding Maud that she doesn't really know this man at all. When she starts poking around, the forgotten case of a missing local schoolgirl comes to light, and a full-steam search for answers begins.

Full of charming eccentricities, twisted comedy, a whole lot of heart, and Jess Kidd's lyrical, lush, and hugely imaginative (Sunday Express Magazine) prose, Mr. Flood's Last Resortis a mesmerizing tale that will make you re-examine the space between sin and sainthood, reminding you that when all is said and done, the most important forgiveness that we can offer is to ourselves.