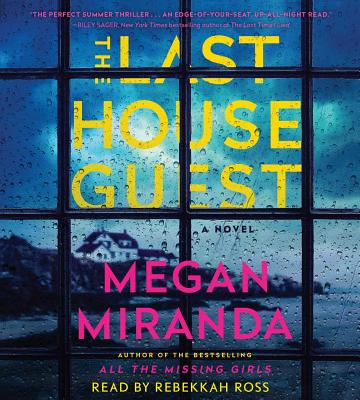 The summer after a wealthy young summer guest dies under suspicious circumstances, her best friend lives under a cloud of grief and suspicion in this “clever, stylish mystery that will seize readers like a riptide” (Publishers Weekly, starred review) featuring “dizzying plot twists and multiple surprise endings” (The New York Times Book Review).

Another thrilling novel from the bestselling author of All the Missing Girls and The Perfect Stranger, Megan Miranda’s The Last House Guest is a smart, twisty read with a strong female protagonist determined to make her own way in the world.

“A riveting read…from master of suspense, Megan Miranda,” (Mary Kubica, New York Times bestselling author of The Good Girl) The Last House Guest is a smart, twisty read that brilliantly explores the elusive nature of memory and the complexities of female friendships.

Praise For The Last House Guest…

"Rebekkah Ross does a solid job narrating this mystery featuring an apparent suicide, a skeptical friend, and a group of 20-somethings who summer in Littleport, Maine. Reformed local bad girl Avery Greer suspects that her best friend's death was not a suicide at all and begins her own private investigation. Her wealthy summer peers respond with frustration and cruelty, which Ross captures nicely. . . . her performance makes for pleasant entertainment."
— AudioFile Magazine

Megan Miranda is the New York Times bestselling author of All the Missing Girls; The Perfect Stranger; The Last House Guest, a Reese Witherspoon Book Club pick; The Girl from Widow Hills; and Such a Quiet Place. She has also written several books for young adults. She grew up in New Jersey, graduated from MIT, and lives in North Carolina with her husband and two children. Follow @MeganLMiranda on Instagram or visit MeganMiranda.com.
Loading...
or
Not Currently Available for Direct Purchase