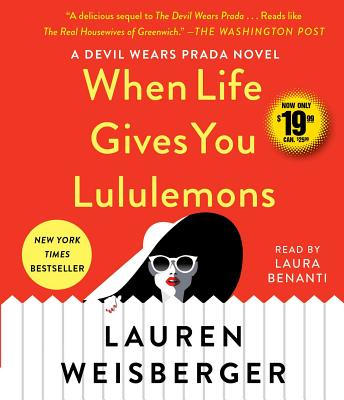 When Life Gives You Lululemons

“The Devil Wears Prada’s Emily Charlton gets the spin-off she deserves” (Cosmopolitan) in the months-long New York Times bestseller from Lauren Weisberger in which three women team up to bring a bad man down in the tony suburb of Greenwich, Connecticut.

Welcome to Greenwich, Connecticut, where the lawns and the women are perfectly manicured, the Tito’s and sodas are extra strong, and everyone has something to say about the infamous new neighbor.

Let’s be clear: Emily Charlton does not do the suburbs. After leaving Miranda Priestly, she’s been working in Hollywood as an image consultant to the stars, but recently, Emily’s lost a few clients. She’s hopeless with social media. The new guard is nipping at her heels. She needs a big opportunity, and she needs it now.

When Karolina Hartwell, a gorgeous former supermodel, is arrested, her fall from grace is merciless. Her senator-husband leaves her, her Beltway friends disappear, and the tabloids pounce.

In Karolina, Emily finds her comeback opportunity. But she quickly learns Greenwich is a world apart and that this comeback needs a team approach.

So it is that Emily, the scorned Karolina, and their mutual friend Miriam, a powerful attorney turned stay-at-home mom, band together to navigate the social land mines of suburban Greenwich and win back the hearts of the American public. Along the way, an unexpected ally emerges in one Miranda Priestly.

With her signature wit, Lauren Weisberger offers an alluring look into a sexy, over-the-top world—and proves it’s style and substance together that gets the job done. “A delicious sequel to The Devil Wears Prada…exploring what it’s like to be a woman buffeted by conflicting messages about career, relationships, and motherhood” (The Washington Post), When Life Gives You Lululemons is “amazing novel about…truth, lies and how everyone is a little bit insecure” (Associated Press). “Fast-paced, funny, and gossipy, this is the must-have accessory for your beach bag” (PopSugar).

Praise For When Life Gives You Lululemons…

Lauren Weisberger is the New York Times bestselling author of The Devil Wears Prada, which was published in forty languages and made into a major motion picture starring Meryl Streep and Anne Hathaway. It was announced in 2017 that musician Elton John and Paul Rudnick will adapt The Devil Wears Prada for the stage. She is also the author of Where the Grass Is Green and the Girls Are Pretty, When Life Gives You Lululemons, The Singles Game, Everyone Worth Knowing, Chasing Harry Winston, Last Night at Chateau Marmont, and Revenge Wears Prada. Her books have sold more than thirteen million copies worldwide. A graduate of Cornell University, she lives in Connecticut with her husband and two children. Visit LaurenWeisberger.com to learn more.
Loading...
or
Not Currently Available for Direct Purchase