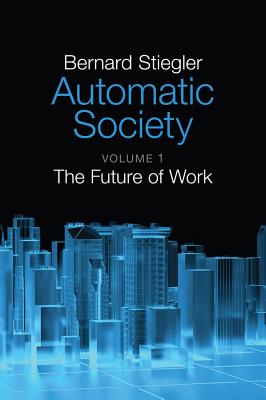 The Future of Work

In July 2014 the Belgian newspaper Le Soir claimed that France, Belgium, the United Kingdom, Italy, Poland and the United States may lose between 43 and 50 per cent of their jobs within ten to fifteen years. Across the world, integrated automation, one key result of the so-called 'data economy', is leading to a drastic reduction in employment in all areas - from the legal profession to truck driving, from medicine to stevedoring.

In this first volume of a new series, the leading cultural theorist Bernard Stiegler advocates a radical solution to the crisis posed by automation and consumer capitalism more generally. He calls for a decoupling of the concept of 'labour' (meaningful, intellectual participation) from 'employment' (dehumanizing, banal work), with the ultimate aim of eradicating 'employment' altogether. By doing so, new and alternative economic models will arise, where individuals are no longer simply mined for labour, but also actively produce what they consume.

Building substantially on his existing theories and engaging with a wide range of figures - from Deleuze and Foucault to Bill Gates and Alan Greenspan - Automatic Society will appeal to students and scholars across the social sciences and humanities, as well as anyone concerned with the central question of the future of work.

Bernard Stiegler is the Director of Cultural Development at Centre Pompidou, Paris.
Loading...
or
Not Currently Available for Direct Purchase