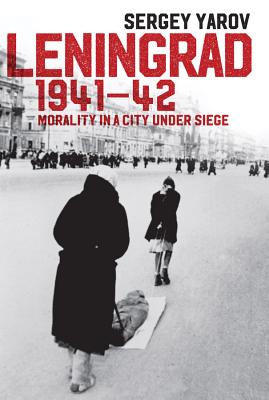 Morality in a City Under Siege

This book recounts one of the greatest tragedies of the twentieth century: the siege of Leningrad. It is based on the searing testimony of eyewitnesses, some of whom managed to survive, while others were to die in streets devastated by bombing, in icy houses, or the endless bread queues. All of them, nevertheless, wanted to pass on to us the story of the torments they endured, their stoicism, compassion and humanity, and of how people reached out to each other in the nightmare of the siege.

Though the siege continues to loom large in collective memory, an overemphasis on the heroic endurance of the victims has tended to distort our understanding of events. In this book, which focuses on the "Time of Death", the harsh winter of 1941-42, Sergey Yarov adopts a new approach, demonstrating that if we are to truly appreciate the nature of this suffering, we must face the full realities of people's actions and behaviour. Many of the documents published here - letters, diaries, memoirs and interviews not previously available to researchers or retrieved from family archives - show unexpected aspects of what it was like to live in the besieged city. Leningrad changed, and so did the morals, customs and habits of Leningraders. People wanted at all costs to survive. Their notes about the siege reflect a drama which cost a million people their lives. There is no spurious cheeriness and optimism in them, and much that we might like to pass over. But we must not. We have a duty to know the whole, bitter truth about the siege, the price that had to be paid in order to stay human in a time of brutal inhumanity.

Sergey Yarov (1959-2015) was Professor of History at the European University, St. Petersburg and Herzen Russian State Pedagogical University, as well as Senior Research Fellow at the St. Petersburg Institute of History of the Russian Academy of Sciences. His work focussed on 20th century Russian history and the Siege of Leningrad in particular. He was awarded the Likhachev Foundation's Antsiferov Prize in 2012 and the Dynasty Foundation's Educator ('Prosvetitel') Prize in 2014.
or support indie stores by buying on
Copyright © 2020 American Booksellers Association