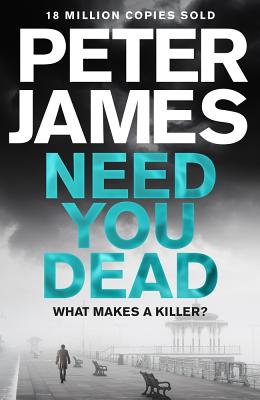 Greg, a married man, has been having an affair for three years with another man's wife. One evening, after a fight with her at their rented love nest, he storms out. When he returns an hour later she is dead. Did he kill her in a fit of rage and blank it out, or did someone else do? Detective Superintendent Roy Grace soon discovers that there is more than one person who had a reason to kill her. But one man has the most to lose—and when his marriage and career are at stake, what lengths will he go to protect all that he holds dear?

"Peter James is one of the best crime writers in the business." —Karin Slaughter

"Peter James has penetrated the inner workings of police procedures, and the inner thoughts and attitudes of real detectives, as no English crime writer before him. His hero, Roy Grace, may not be the most lively cop, nor the most damaged by drink, weight or misery, but he's one of the most believable." —Times

"In my thirty four years of policing, never have I come across a writer who so accurately depicts "The Job." —Detective Investigator Pat Lanigan, Office of the District Attorney, NYPD

Peter James is a New York Times-bestselling author. His Detective Superintendent Roy Grace series has been translated into 36 languages with worldwide sales of over 18 million copies. He is Overseas Vice-President of International Thriller Writers in the U.S., and served two terms as chairperson of the UK Crime Writers Association. In 2016 he became the recipient of the coveted CWA Diamond Dagger lifetime achievement.
Loading...
or support indie stores by buying on
(This book is on backorder)