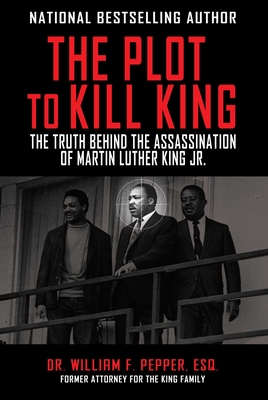 The Plot to Kill King

The Truth Behind the Assassination of Martin Luther King Jr.

William Pepper was James Earl Ray’s lawyer in the trial for the murder of Martin Luther King Jr., and even after Ray’s conviction and death, Pepper continues to adamantly argue Ray’s innocence. This myth-shattering exposé is a revised, updated, and heavily expanded volume of Pepper’s original bestselling and critically acclaimed book Orders to Kill, with twenty-six years of additional research included. The result reveals dramatic new details of the night of the murder, the trial, and why Ray was chosen to take the fall for an evil conspiracy—a government-sanctioned assassination of our nation’s greatest leader. The plan, according to Pepper, was for a team of United States Army Special Forces snipers to kill King, but just as they were taking aim, a backup civilian assassin pulled the trigger.

In The Plot to Kill King, Pepper shares the evidence and testimonies that prove that Ray was a fall guy chosen by those who viewed King as a dangerous revolutionary. His findings make the book one of the most important of our time—the uncensored story of the murder of an American hero that contains disturbing revelations about the obscure inner-workings of our government and how it continues, even today, to obscure the truth.

Praise For The Plot to Kill King: The Truth Behind the Assassination of Martin Luther King Jr.…

"Dr. Pepper has waged a 37-year struggle for truth and justice on behalf of another scapegoat, James Earl Ray--the alleged assassin of Dr. Martin Luther King Jr.--and the King family. This book is the culmination of that effort and reveals the truth about that assassination."--Sirhan Sirhan

Dr. William F. Pepper is a human rights lawyer most known for his defense of James Earl Ray in the trial for the murder of Martin Luther King Jr., a longtime friend of Pepper’s, and of Sirhan Sirhan in the trial for the murder of Senator Robert Kennedy. Pepper is the author of Orders to Kill and An Act of State, has been active in government conspiracy cases, including the 9/11 Truth Movement, and in attempts to charge George W. Bush with war crimes. He was appointed a barrister of the United Kingdom, but now primarily resides in New York.
Loading...
or
Not Currently Available for Direct Purchase