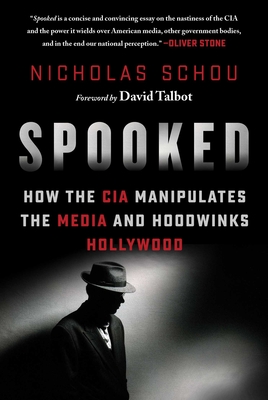 How the CIA Manipulates the Media and Hoodwinks Hollywood

The American people depend on a free press to keep a close and impartial watch on the national security operations that are carried out in our name. But in many cases, this trust is sadly misplaced, as leading journalists are seduced and manipulated by the secretive agencies they cover.

While the press remains silent about its corrupting relationship with the intelligence community—a relationship that dates back to the Cold War—Spooking the News will blow the lid off this unseemly arrangement. Schou will name names and shine a spotlight on flagrant examples of collusion, when respected reporters have crossed the line and sold out to powerful agencies. The book will also document how the CIA has embedded itself in “liberal” Hollywood to ensure that its fictional spies get the hero treatment on screen.

Among the revelations in Spooking the News:
• The CIA created a special public affairs unit to influence the production of Hollywood films and TV shows, allowing celebrities involved in pro-CIA projects—including Harrison Ford and Ben Affleck—unique access inside the agency's headquarters.
• The CIA vets articles on controversial topics like the drone assassination program and grants friendly reporters background briefings on classified material, while simultaneously prosecuting ex-officers who spill the beans on damaging information.

Nicholas Schou is an award-winning investigative journalist and the author of Kill the Messenger: How the CIA’s Crack Cocaine Epidemic Destroyed Journalist Gary Webb, which provided the basis for the 2014 Focus Features movie starring Jeremy Renner. He lives in Long Beach, California.
Loading...
or
Not Currently Available for Direct Purchase