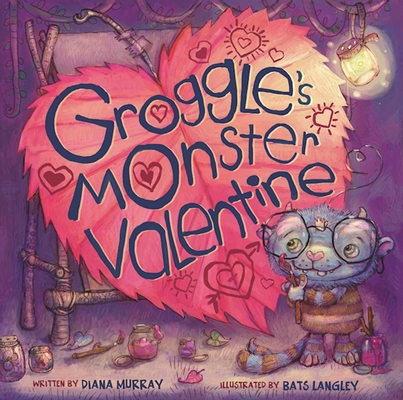 The perfect illustrated story for boys and girls and parents to create special Valentine’s Day memories.

Groggle has been up all night making a Valentine’s Day card. This isn’t just any Valentine, though, and it has to be perfect—it’s for Snarlina, his beast friend in the whole wide world.

Searching in the dark forest, he finds just the right heart-shaped leaves. He collects some bog slime and squirts everything he wants to say in bold, gooey letters. Groggle’s creation looks horribly good. But there’s just one problem—gobble, crunch, crunch, slurp! He has a monster appetite!

Groggle tries again, this time writing poem after poem to make sure he has some extras just in case. He picks skunk flowers, carefully ties on snake bows, and sprinkles shiny beetle glitter. He decorates each card with care. But . . . gobble, crunch, crunch, slurp! Groggle’s monster impulses foil his efforts and he’s run out of time.

Will Groggle ever be able to give his toothsome, stomping, monstrous friend Snarlina a Valentine? Find out in this monster of a tale.

Fans of Rachel Bright's The Love Monster series or David Ezra Stein's Dinosaur Kisses will fall in love with Groggle and his Snarlina!

Diana Murray is a poet and picture book author whose other books include City Shapes, Grimelda: The Very Messy Witch, and Ned the Knitting Pirate. Diana’s award-winning children’s poems have appeared in many magazines, such as Highlights and Spider. She lives in New York City with her husband, two very messy children, and a motley crew of lizards, snails, and fish.

Bats Langley grew up in Wolcott, Connecticut and attended the Rhode Island School of Design. His art has been shown in galleries in New York City, Los Angeles, Hangzhou, China, and has even been displayed in the United States Capitol building. Mr. Langley has also been a regular contributor to Ladybug and Spider magazines. This is his first picture book. He resides in New York, New York.
Loading...
or support indie stores by buying on