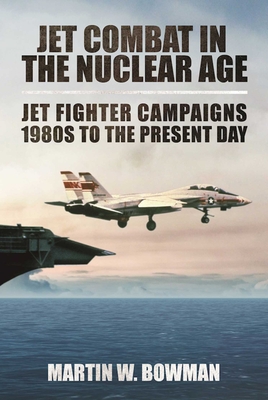 Jet Combat in the Nuclear Age

Follow the fighters of the strategic nuclear strike force.

In this book, the roles of jet fighters and fighter bombers in the Nuclear Age are explored. Bowman consolidates a range of firsthand accounts from the pilots themselves with a well-researched history of military aviation from the 1980s to today.

Jet Combat in the Nuclear Age pays tribute to the men and women of the USAF Strategic Air Command (SAC) and their role in maintaining peace by deterring any perceived Soviet threat with a retaliatory nuclear attack. The 1980s also brought a new enemy in air operations in the Middle East when US Navy F-14 Tomcats and other jet aircraft mounted retaliatory operations against Libya.

The book spotlights military craft in action across the globe:
US Navy A-6E Intruders bombed Benghazi in 1986 in retaliation for the bombing of a West Berlin disco
F-111Fs and RAF Jaguars decimated Saddam Hussein’s forces in the opening rounds of Desert Storm
Carrier-based craft deployed in support of military operations Joint Endeavor, Desert Strike, and Sharp Guard

Today the war against terror continues to rely on air power, with small teams of Special Forces troops directing attack aircraft against enemy positions. Jet Combat in the Nuclear Age outlines an era when victory comes from above.

Martin W. Bowman is one of Britain’s best-known Second World War aviation historians and authors. His previous books include Confounding the Reich, B-17: Combat Missions and Clash of Eagles. He resides in Norwich, England.
Loading...
or
Not Currently Available for Direct Purchase