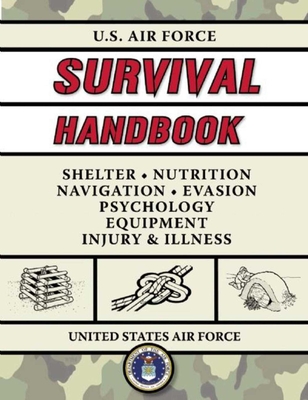 The Portable and Essential Guide to Staying Alive (US Army Survival)

This Air Force handbook was written to help pilots who find themselves in hostile environments. While it is designed for use in formal Air Force training, it is also useful for the general reader seeking a comprehensive and complete manual of outdoor survival techniques. Any US Army survival kit would also benefit from this handbook.

Among other pieces of professional and expert advice, the US Air Force Survival Handbook tells readers about:

Released on the 70th anniversary of the US Air Force, this book outlines specific survival threats found in many different types of terrain and how to survive them. It is invaluable to all who enjoy the outdoors and anyone who seeks insight into the training tactics of the US Air Force.

The United States Air Force is the aerial warfare branch of the United States Armed Forces. It is the largest air force in the world and one of the most technologically advanced. As part of the United States Department of Defense, it is headquartered in the Pentagon, in Arlington, Virginia.
or support indie stores by buying on
Copyright © 2020 American Booksellers Association