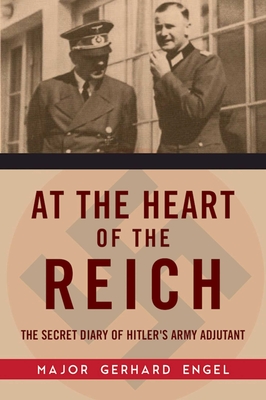 At the Heart of the Reich (Hardcover)

A revealing account of Hitler’s thoughts and actions throughout World War II from one of his closest aides.

Major Gerhard Engel was Hitler's army adjutant from 1938 to 1943. During his years with Hitler, Engel kept a diary. After the war, he added material to shed further light on certain events, military and political decisions, and Hitler's attitude to particular problems. His diary covers the decision-making process behind crucial military actions, including the annexation of Austria, the invasion of Czechoslovakia, and the war against Russia. He also addresses intrigue within Hitler's inner circle and his casual conversations with other key Nazi figures.

At the Heart of the Reich sheds important light on the Fuhrer's core beliefs. It includes the statement made by Hitler in 1941, “I am now as before a Catholic.” It also details his views on German Jews and dwells on the extent to which they served in the Wehrmacht. Engel also addresses the deportation of Jews from Salonika and Hitler's order to Himmler to select a destination, the details of which Hitler was apparently unconcerned with. The final part of the diary is mostly devoted to the war against Russia. Engel's reports confirm that the master plan was to take Leningrad and Rostov, then close pincers behind Moscow. The plan was frustrated by senior army commanders'’ lack of enthusiasm and Hitler's failure to exert firm leadership. Engel depicts Hitler as a vacillating, contrary man. It is not unlikely that this encouraged his generals to impose themselves and argue their plan to rush Moscow, which ultimately contributed to the defeat of the Third Reich.

Skyhorse Publishing, along with our Arcade, Good Books, Sports Publishing, and Yucca imprints, is proud to publish a broad range of biographies, autobiographies, and memoirs. Our list includes biographies on well-known historical figures like Benjamin Franklin, Nelson Mandela, and Alexander Graham Bell, as well as villains from history, such as Heinrich Himmler, John Wayne Gacy, and O. J. Simpson. We have also published survivor stories of World War II, memoirs about overcoming adversity, first-hand tales of adventure, and much more. While not every title we publish becomes a New York Times bestseller or a national bestseller, we are committed to books on subjects that are sometimes overlooked and to authors whose work might not otherwise find a home.
or
Not Currently Available for Direct Purchase
Copyright © 2020 American Booksellers Association