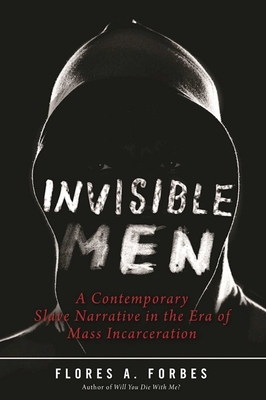 A Contemporary Slave Narrative in the Era of Mass Incarceration

Winner of the 2017 American Book Award

Flores Forbes, a former leader in the Black Panther Party, has been free from prison for twenty-five years. Unfortunately that makes him part of a group of black men without constituency who are all but invisible in society. That is, the “invisible” group of black men in America who have served their time and not gone back to prison.

Today the recidivism rate is around 65%. Almost never mentioned in the media or scholarly attention is the plight of the 35% who don’t go back, especially black men. A few of them are hiding in Ivy League schools’ prison education programs—they don’t want to be known—but most of them are recruited by the one billion dollar industry reentry employee programs that allow the US to profit from their life and labor. Whereas, African Americans consist of only 12% of the population in the US, black males are incarcerated at much higher rates. The chances of these formerly convicted men to succeed after prison—to matriculate as leading members of society—are increasingly slim. The doors are closed to them.

Invisible Men is a book that will crack the code on the stigma of incarceration. When Flores Forbes was released from prison, he made a plan to re-invent himself but found it impossible. His involvement in a plan to kill a witness who was testifying against Huey P. Newton, the founder of the Black Panther Party, had led to his incarceration. While in prison he earned a college degree using a Pell Grant, with hope this would get him on the right track and a chance at a normal life. He was released but that’s where his story and most invisible men’s stories begin.

This book will weave Flores’ knowledge, wisdom, and experience with incarceration, sentencing reform, judicial inequity, hiding and re-entry into society, and the issue of increasing struggles and inequality for formerly incarcerated men into a collection of poignant essays that finally give invisible men a voice and face in society.

Flores A. Forbes: Flores Forbes is the associate vice president of strategy policy & program implementation at Columbia University and the author of Will You Die With Me?
Loading...
or
Not Currently Available for Direct Purchase