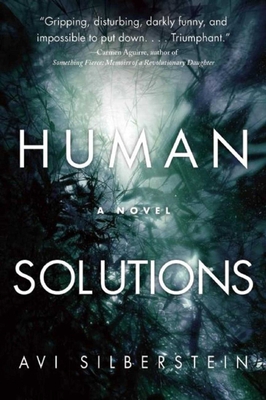 "If The Boys from Brazil was written by Paul Auster, you'd have Human Solutions. Prepare for a one-sitting read." —Robert Hough, author of The Final Confession of Mabel Stark and The Stowaway

To most people, Javier Gonzalez is an ordinary man. If one were to ask, he would say that he runs an acting studio in Santiago, Chile, which is true, but not the whole story. Only a handful of people know that Javier also runs an unusual sort of business. With the help of a team of actors, Javier engineers social situations that meet the unique needs of his clients. If you want your boss to like you, he can help; if you want the weatherman to fall in love with you, he can arrange it. He calls his business Human Solutions, and that’s exactly what he provides. Javier’s manipulations never fail because he controls every moment of every interaction—he is precise, observant, and emotionally ruthless—and this has served him well.

But one day he slips. He falls for a woman, and against his better judgment and the counsel of his associates, Javier takes on her case—a case he would never touch under ordinary circumstances. The woman’s name is Elena, and her son is locked behind the protected walls of a cult masquerading as an educational institution. She wants him out, so Javier agrees to go in. Once behind the walls of the compound, Javier meets a man who is running a larger-scale social manipulation than he ever thought possible. The man is Peter Wenzel—or Uncle Peter, as he insists on being called. As the charismatic leader of the cult, he deftly manipulates his followers through a complicated system of fear, deception, and brutality. He is a man with no conscience—and Javier quickly realizes that he may have met his match.

For the first time in paperback, experience this chilling story about cults, crime, and the lengths we go to for love in Human Solutions.

Avi Silberstein was born in Chile in 1982 and moved to Canada in 2000. His short stories have appeared in publications including the New Quarterly and Grain. He is a librarian in British Columbia, Canada, where he founded the library’s bike mobile service and Library While You Wait program—both initiatives designed to bring libraries to the people. This is his first novel.
Loading...
or
Not Currently Available for Direct Purchase