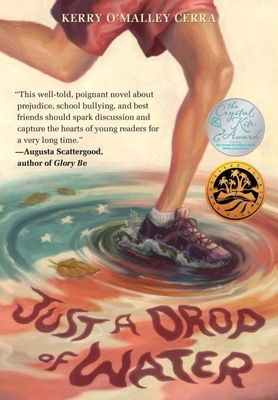 Just a Drop of Water

Winner of the Crystal Kite Award, this touching story explores what it mean to be a good friend, how you should react to a bully, and makes the events of September 11th, 2001 personal.

In this story about growing up in a difficult part of America’s history, Jake Green is introduced as a cross country runner who wants to be a soldier and an American hero when he grows up.

Before he can work far towards these goals, September 11th happens, and it is discovered that one of the hijackers lives in Jake’s town. The children in Jake’s town try to process everything, but they struggle. Jake’s classmate Bobby beats up Jake’s best friend, Sam Madina, just for being an Arab Muslim.

According to his own code of conduct, Jake wants to fight Bobby for messing with his best friend. The situation gets more complicated when Sam’s father is detained and interrogated by the FBI. Jake’s mother doubts Sam’s father’s innocence. Jake must choose between believing his parents and leaving Bobby alone or defending Sam.

Praise For Just a Drop of Water…

"Cerra does a good job of re-creating the combination of fear, confusion, patriotism, prejudice and community spirit the attack engendered, and readers should identify with Jake's plight. A perceptive exploration of an event its audience already sees as history." —Kirkus Reviews

"9/11 reverberates in a middle-school boy's life, thrusting him into a bigger and more threatening world. This is history tensely told for readers too young to remember the moment when this century truly began." —Richard Peck, author of On The Wings of Heroes

“Tackling a difficult topic, Kerry O’Malley Cerra captures the mood of the country right after September 11 in a way that’s not frightening or sensationalized. This well-told, poignant novel about prejudice, school bullying, and best friends should spark discussion and capture the hearts of young readers for a very long time.” —Augusta Scattergood, author of Glory Be

“Kerry O'Malley Cerra’s Just a Drop of Water explores the aftermath of September 11th, but more importantly, she shows how Jake Green, a middle school track star, comes to understand how to be a much needed friend to Sameed Madina, of Muslim decent, and helps to restore peace in their neighborhood. This touching story is like the legend of the origami paper cranes, a symbol of peace, which states that if you fold one thousand of them, your heart’s desire will come true.” —Kathryn Fitzmaurice, author of A Diamond in the Desert

“Kerry O’Malley Cerra has written a novel that is both brave and true. In showing us the darker sides of ourselves when confronted with tragedy and fear, her characters lead us to the light.” —Laurie Calkhoven, author of Michael at the Invasion of France, 1943

"Just a Drop of Water brings this generation's young readers a glimpse of
September 11 that is both thought-provoking and real." —Caroline Starr Rose, author of May B

"Memorable characters bring to life a story of friends who, after the tragedy of September 11, must confront the darker side of their community, their families, and their hearts. Kerry O'Malley Cerra is definitely a debut author to watch!" —Christina Diaz Gonzalez, author of The Red Umbrella and A Thunderous Whisper

Kerry O’Malley Cerra is a former high school history teacher who often enhanced textbooks with historical fiction to bring time periods to life. Just a Drop of Water, her first middle grade novel, was inspired by a deeply personal reaction to the tragic events of September 11, 2001. She lives in Coral Springs, Florida.
Loading...
or support indie stores by buying on