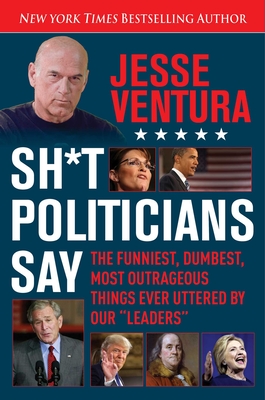 The Funniest, Dumbest, Most Outrageous Things Ever Uttered By Our "Leaders"

From the moment a Founding Father first asked for a vote, politicians have been saying dumb stuff. From George Washington to George Bush (both of them!) right on to present-day pundits like Donald Trump, Sarah Palin, and Hillary Clinton, political leaders can always be counted on to say funny, exasperating, and nonsensical things, often unintentionally. In Sh*t Politicians Say, Jesse Ventura shares the most entertaining and disturbing “thoughts” from his political brethren, including these winners:

“The concept of global warming was created by and for the Chinese in order to make U.S. manufacturing non-competitive.” —Donald Trump
“I am not worried about the deficit. It is big enough to take care of itself.” —Ronald Reagan
“I think gay marriage is something that should be between a man and a woman.” —Arnold Schwarzenegger
“I love California, I practically grew up in Phoenix.” —Dan Quayle
“A zebra does not change its spots.” —Al Gore
“People have got to know whether or not their president is a crook. Well, I’m not a crook. I’ve earned everything I’ve got.” —Richard Nixon
“Death has a tendency to encourage a depressing view of war.” —former Defense Secretary Donald Rumsfeld
“I’ll be long gone before some smart person ever figures out what happened inside this Oval Office.” —George W. Bush

From bigoted statements to outright lies . . . flip-flopping to just TMI, Sh*t Politicians Say will provide readers with a welcome respite from the presidential campaigns.

Jesse Ventura is the former independent governor of Minnesota. He is also a former US Navy frogman, a professional wrestler, a movie actor, a visiting fellow at Harvard Kennedy School of Government, and the New York Times bestselling author of seven books, including American Conspiracies, 63 Documents the Government Doesn’t Want You to Read, and Don’t Start the Revolution Without Me! He was the host and executive producer of truTV’s Conspiracy Theory with Jesse Ventura, which won the Stony Award from High Times magazine in 2010. He was also the host of the political talk show Off The Grid, which aired on RT America and online at Ora.tv. He has a reputation as a rebel and a freethinker, and he has no qualms about questioning authority. He spends half the year in Baja, Mexico and the other half in his home state of Minnesota.
or
Buy Here
Copyright © 2020 American Booksellers Association