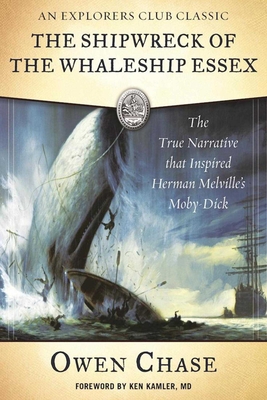 The Shipwreck of the Whaleship Essex (Paperback)

The Shipwreck of the Whaleship Essex is the harrowing narrative of an unfortunate vessel’s calamitous encounter with a great white whale, and the crew’s perilous fight for survival on the open sea. This Explorer’s Club edition faithfully reproduces Owen Chase’s original 1821 narrative, in which he chronicles the great whale’s attack on the ship, the Essex’s subsequent sinking, and the more than exhausting months at sea that followed, in which the fraction of the crew that survived desperately clung to life. Struggling against a relentless sea, the insufferable climate, and ever-increasing hunger, Chase was one of only eight crew members who survived the ordeal.

Evocating all of the passion and terror of the greatest adventure stories, The Shipwreck of the Whaleship Essex is a thrilling tale that captures both man and beast’s most shocking and raw natural impulses. Filled with terror and suspense, it is no wonder that the great American novelist, Herman Melville, chose it as his inspiration for one of the most iconic works of literature in American history.

Owen Chase was the first mate of the whaler Essex, which was rammed and sank by a sperm whale 2,000 miles off the coast of South America on October 28, 1820. His Narrative of the Most Extraordinary and Distressing Shipwreck of the Whale-Ship Essex recounts that disaster. Chase passed away in 1869 at the age of seventy-one in Nantucket, Massachusetts.

Kenneth Kamler, MD, renowned specialist in survivalist medicine, was named by US World News and Report as one of America’s Best Physicians in 2011 and is the author of Doctor on Everest and Surviving the Extremes. In his career, Kamler has served as explorer-in-residence for the Natural History Museum, a consultant for NASA, and a contributor to National Geographic. He has appeared on CNN, Nightline, Dateline NBC, the Today show, and the Oprah Winfrey Show. Kamler lives in New York City.
or
Not Currently Available for Direct Purchase
Copyright © 2020 American Booksellers Association