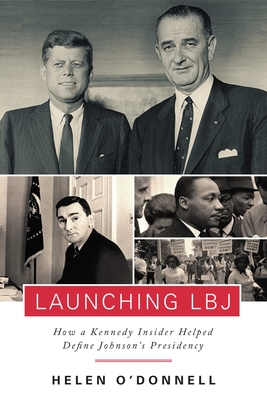 Kenneth O'Donnell was JFK's Chief of Staff, among the group known as Kennedy's "Irish Mafia." O'Donnell was with Jack Kennedy through his entire time in office ... and he was on Air Force One in Dallas, at Jacqueline Kennedy's side, as Lyndon Johnson got sworn in. When John F. Kennedy was assassinated, LBJ asked Ken O'Donnell to stay on and work with him through the first nine months of his administration, to help the country transition and heal, and to help Johnson set his own agenda for his presidency. Although they were political adversaries, they developed a mutually respectful rapport, and Ken helped LBJ find his voice, starting with his work in voting rights and developing the civil rights agenda. Ken O'Donnell was a prolific diarist and note taker, and in Launching LBJ, his daughter Helen, a respected historian and journalist in her own right, takes her father's journals and fills in the gaps to create an unprecedented, inside look at the early days of President Lyndon Johnson's regime.

“No one knew John Kennedy, Robert Kennedy, and Lyndon Johnson better than Kenneth O’Donnell, and no one tells the story of their coming apart with more verve and insight than his daughter Helen, in this marvelous account of tragedies and achievements that transformed America.”—JOHN A. FARRELL, author of Richard Nixon: The Life

Helen O&rsquo;Donnell is a noted historian, journalist, and author. She has written several books about her father and his relationship with President Kennedy, including The Irish Brotherhood: John F. Kennedy, His Inner Circle, and the Improbable Rise to the Presidency. She has utilized her father&rsquo;s diaries and notes to create an inside view of the presidency at the start of the Johnson administration. She lives in Washington, DC
Loading...
or
Not Currently Available for Direct Purchase