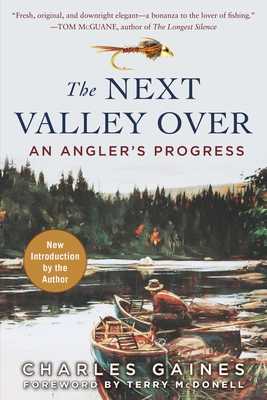 The Next Valley Over

Acclaimed sporting and adventure writer Charles Gaines has spent much of his life on the water, around the world, fishing rod in hand, angling for trout, redfish, salmon, bonefish, bass, marlin, tuna, and practically everything else that swims. Just about any place where there's water to fish and eccentrics to keep him company, Gaines has been.

The Next Valley Over, a collection of his best writing on fishing from his long and storied career, is culled from the pages of Men's Journal, Forbes, and Sports Afield, among other publications, and ultimately is about the heart of the sport. While his stories are lined with the accoutrement of angling--the art of technique, the equipment, the lodges, the fish themselves--they're really about why we love to fish and what it means to our culture. As Thoreau once said: “Many men go fishing all their lives without knowing that it is not fish they are after.” What “they are after” is what Charles is curious about, and he has devoted the better part of his life and sanity to coming up with answers.

Starting and ending at the majestic Lake Tadpole in St. Clair County, Alabama, where Gaines’s love of fishing was initially sparked, the Next Valley Over chronicles exploits in exotic locations with eccentric characters. In the process of his quest of nearly every species known to man, Gaines explores what we are really searching for when we fish.

Charles Gaines is the author of the National Book Award finalist Stay Hungry and the international nonfiction bestseller Pumping Iron, as well as being a lifelong sportsman and outdoor adventurer. He serves as US director of the Atlantic Salmon Federation and is a founder and lifetime board member of the US Fly Fishing Team. He lives in Nova Scotia, Canada, and Birmingham, Alabama.

Terry McDonell has won numerous awards for his editorial work at various magazines and websites. He is also a novelist and poet, and has written and produced for film and television. In 2012 he was inducted into the American Society of Magazine Editors’ Hall of Fame. He is the president of the board of the Paris Review Foundation and serves on the Board of Overseers of the Columbia Journalism Review. He lives in New York City.
Loading...
or support indie stores by buying on