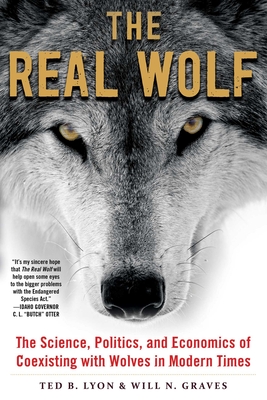 The Science, Politics, and Economics of Coexisting with Wolves in Modern Times

Ted B. Lyon, Will N. Graves

A comprehensive look at one of the most controversial predators in North America.
The Real Wolf is an in-depth study of the impact that wolves have had on big game and livestock populations as a federally protected species. Expert authors Ted B. Lyon and Will N. Graves, sift through the myths and misinformation surrounding wolves and present the facts about wolves in modern times. Each chapter in the book is meticulously researched and written by authors, biologists, geneticists, outdoor enthusiasts, and wildlife experts who have spent years studying wolves and wolf behavior. Every section describes a unique aspect of the wolf in the United States. The Real Wolf does not call for the eradication of wolves from the United States but rather advocates a new system of species management that would allow wolves, game animals, and farmers to coexist with one another in a way that is environmentally sustainable.
Contributors to this groundbreaking environmental book include:

Ted B. Lyon is an attorney specializing in complex litigation with more than thirty years of experience. Lyon served in both the Texas House of Representatives (1979–1983) and the Texas State Senate (1983–1991). He has received numerous prestigious and meaningful awards including the 2012 Teddy Roosevelt Conservationist of the Year Award. Lyon lives in Heath, Texas.

Will N. Graves volunteered for the US Air Force and was trained as a Russian linguist. In order to accelerate and develop his skills in Russian, he started reading Russian wildlife magazines and books. Wolves were often discussed and soon his interest focused on wolves in Russia. Graves's interest in wolves grew into a serious hobby that continued after the war. Graves lives in Millerville, Maryland.
Loading...
or
Not Currently Available for Direct Purchase