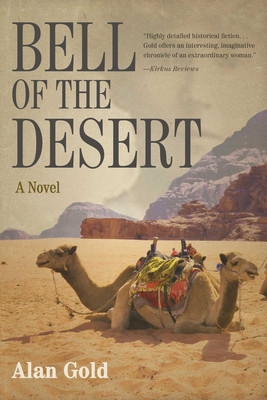 Bell of the Desert (Paperback)

She was the most celebrated adventurer of her day, the brains behind Lawrence of Arabia, an adviser to kings and desert sheikhs, and the British government’s secret weapon in WWI in the campaign against the Turks. A brilliant academic, mountaineer, explorer, linguist, politician, and towering literary figure, Gertrude Bell is the most significant unsung heroine of the twentieth century.

Told as a biographical narrative of history, Alan Gold’s meticulously researched novel accurately opens history’s pages on a peerless woman who broke all molds on how Victorian women were supposed to behave—socially, intellectually, and physically. Guiding the events of the day in open, sanctioned diplomacy and adventure all across the Middle East, her influence on the men at the vanguard of history, and her unparalleled skill in sculpting the pathways and influences of the English, French, and Arab allies on the region, all lead to perhaps her greatest achievement: single-handedly creating today’s Iraq.

For the first time paperback, experience the harrowing story of this extraordinary woman who most determinedly fashioned the Arab world as we know it today.

Alan Gold is an influential columnist for the Spectator, the Australian and other magazines. He appears regularly in the media as a commentator on human rights and international politics. Gold's previous works include the internationally-successful The Jericho Files, as well as the bestseller The Lost Testament. He currently lives in Sydney, Australia with his family.
or
Not Currently Available for Direct Purchase
Copyright © 2020 American Booksellers Association