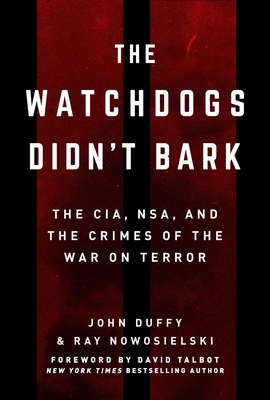 The CIA, NSA, and the Crimes of the War on Terror

The shocking reexamination of the failures of US government officials to use available intelligence to stop the attack on American on September 11, 2001. “The authors lay bare…an intelligence failure of historic proportions.”—John Kiriakou, former CIA officer, author, The Convenient Terrorist

In 2009, documentarians John Duffy and Ray Nowosielski arrived at the offices of Richard Clarke, the former counterterror adviser to Presidents Clinton and Bush. In the meeting, Clarke boldly accused one-time Central Intelligence Agency director George Tenet of “malfeasance and misfeasance” in the pre-war on terror. Thus began an incredible—never-before-told—investigative journey of intrigue about America’s intelligence community and two 9/11 hijackers.

The Watchdogs Didn’t Bark details that story, unearthed over a ten-year investigation. Following the careers of a dozen counterterror employees working in different agencies of the US government from the late 1980s to the present, the book puts the government’s systems of oversight and accountability under a microscope. At the heart of this book is a mystery: Why did key 9/11 plotters Khalid Al Mihdhar and Nawaf Al Hazmi, operating inside the United States, fall onto the radars of so many US agencies without any of those agencies succeeding in stopping the attacks?

The answers go beyond mere “conspiracy theory” and “deep state” actors, but instead find a complicated set of potential culprits and an easily manipulated system. Taking readers on a character-driven account of the causes of 9/11 and how the lessons of the attacks were cynically inverted to empower surveillance of citizens, kidnapping, illegal imprisonment, torture, government-sanctioned murder, and a war on whistleblowers and journalists, an alarm is raised which is more pertinent today than ever before.

Praise For The Watchdogs Didn't Bark: The CIA, NSA, and the Crimes of the War on Terror…

“Stories of characters in the dark corners of the bureaucracies, where the secrets are kept… Duffy and Nowosielski name names and hold people to account. If only our government had the courage to do the same.”
—ALEX GIBNEY, Co-creator, Hulu’s The Looming Tower

“A devastating portrait of an agency that is almost singularly committed to its own impunity… Has any government agency, anywhere, been as successful as the modern CIA in avoiding accountability for its grotesque failures and abuses, including grave violations of human rights?”
—BEN WIZNER, Legal adviser to Edward Snowden, ACLU

“A detailed, comprehensive indictment for prosecution of these unpunished masters of elaborate deception, wielding secrecy as the main weapon.”
—JOHN YOUNG, Co-creator, Cryptome.org

“Snapshot of the much larger blueprint of malfeasance that ran rampant across the US government… Having been personally affected and engaged on these issues for the past seventeen years, even we learned new pieces of disturbing and damning information… A must read.”
—PATTY CASAZZA, MONICA GABRIELLE, MINDY KLEINBERG, LORIE VAN AUKEN, “The Jersey Widows”

Ray Nowosielski is a documentary filmmaker and journalist who has written for Salon and Truthout and contributed to investigations by Newsweek, The Daily Beast, and The Intercept. He has directed several documentaries, including 2006’s critically acclaimed Press For Truth, and has produced for HBO, Amazon, Discovery Impact, and Morgan Spurlock. He lives in New York City.

John Duffy is a writer and activist. He produced the documentary Press for Truth as well as the investigative podcast Who Is Rich Blee? He has worked extensively in the environmental movement to fight tar sand extraction, fracking, and logging on public lands. His anonymous essays critiquing the contradictions of big systems and their fallout on ecology and society appear regularly in a variety of media. He currently lives in a quiet cabin in the Midwest with his family.
Loading...
or
Not Currently Available for Direct Purchase