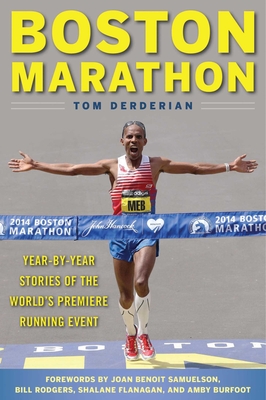 From running legend Tom Derderian comes a comprehensive look at one of the most storied and celebrated athletic events in the nation, the Boston Marathon.

For more than 110 years, the race has been regarded as one of the world’s great racing traditions. From the narrow starting line on Main Street, through the Screams Tunnel, past the coeds of Wellesley, and up the infamous Heartbreak Hill, Derderian chronicles the unforgettable passions, triumphs, and pitfalls of every race in the marathon’s storied history. The book also includes interviews and race recaps from marathoning greats such as Bill Rodgers, Joan Benoit Samuelson, Meb Keflezighi, Uta Pippig, Alberto Salazar, Frank Shorter, Kara Goucher, Ryan Hall, Desiree Davila, Geoffrey Mutai, Robert Kipkoech Cheruiyot, and dozens more.

Complete with more than one hundred photographs and results from every year, Boston Marathon belongs on the shelf of every runner.

Amby Burfoot won the Boston Marathon in 1968 and joined Runner's World ten years later. He became executive editor in 1985, and he held the position for twenty years before retiring in 2013. Amby has run 110,000 miles in his lifetime and owns the US's longest active "race road streak," having completed the Thanksgiving Day 5-mile run in Manchester, Connecticut, fifty-five years in a row. Currently a writer at-large for Runner's World, he has been honored by numerous running organizations both as an athlete and as a writer. Now in his early seventies, he continues running up to thirty miles a week.
Loading...
or
Not Currently Available for Direct Purchase