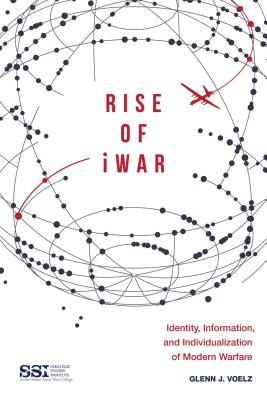 Identity, Information, and the Individualization of Modern Warfare

During a decade of global counterterrorism operations and two extended counterinsurgency campaigns, the United States was confronted with a new kind of adversary. Without uniforms, flags, and formations, the task of identifying and targeting these combatants represented an unprecedented operational challenge. The existing, Cold War-era doctrinal methods were largely unsuited to the cyber-warfare and terrorism that have evolved today.

Rise of iWar examines the doctrinal, technical, and bureaucratic innovations that evolved in response to these new operational challenges. It discusses the transition from a conventionally focused, Cold War-era military approach to one optimized for the internet age, focused on combating insurgency networks and conducting identity-based targeting. It also analyzes the policy decisions and strategic choices that caused these changes. This study concludes with an in-depth examination of emerging technologies that are likely to shape how this mode of warfare will be waged in the future, and provides recommendations for how the US military should continue to adapt to be combat its foes in the digital age.

Colonel Glenn Voelz has served in a variety of military and intelligence community assignments including positions at the Defense Intelligence Agency, on the Joint Chiefs of Staff and White House Situation Room. He was an Assistant Professor of History at West Point and the senior U.S. military intelligence advisor to the Saudi Arabian Ministry of Defense, as well as other assignments in Asia, the Middle East, Europe and Africa. Most recently he was nominated as the Army War College Fellow at the Massachusetts Institute of Technology Security Studies Program and MIT’s Lincoln Laboratory, conducting research in the areas of defense strategy and military innovation. He is currently the senior intelligence analyst on the International Military Staff at NATO Headquarters in Brussels, Belgium. Colonel Voelz is a graduate of the United States Military Academy at West Point and holds advanced degrees from the University of Virginia and the National Intelligence University in Washington, DC.

The Strategic Studies Institute is the U.S. Army's institute for geostrategic and national security research and analysis. The Strategic Studies Institute conducts strategic research and analysis to support the U.S. Army War College curricula, provides direct analysis for Army and Department of Defense leadership, and serves as a bridge to the wider strategic community.
or support indie stores by buying on
Copyright © 2020 American Booksellers Association