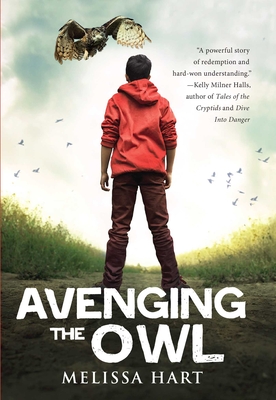 Solo Hahn had always gotten good grades, had good friends, and gotten along with his parents. He wrote screenplays for fun. But when his parents uproot him and move the family from California to backwoods Oregon, Solo starts to lose track of the person he was.

The only thing keeping him grounded is the small gray-and-white kitten he brought with him from home, until one night she gets outside and an owl hunts her for its dinner. When Solo tries to avenge the death of his kitten, he gets eight months of community service. Eight weeks of working at the local raptor center helping owls; the same creatures that killed his kitten in the first place.

For the first time in his life, Solo is labeled a troubled kid, an at-risk youth. Stuck with a bad reputation and weeks of work with Sergeant Bird-Nerd, Solo has to find a way to survive the summer.

Melissa Hart teaches at the School of Journalism and Communication at the University of Oregon. Her articles and essays have been published by the Washington Post, the Los Angeles Times, the Boston Globe, Writer&rsquo;s Digest, and many other publications. Melissa currently resides in Eugene, Oregon, where she can hear western screech owls in her backyard.
Loading...
or
Not Currently Available for Direct Purchase