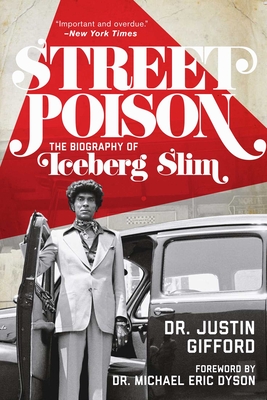 An Amazon Top 100 Book of the Year

Street Poison is the first and definitive autobiography of Robert Beck, a.k.a. Iceberg Slim, at once one of America’s most infamous pimps and history’s best-selling African American writers. Slim became infamous for his ruthless pimping in the `40s and `50s; following a stint in solitary confinement, he would reinvent himself as a famous and influential author, writing his multi-million copy autobiography, Pimp, along with popular novels such as Trick Baby and Mama Black Widow. Iceberg Slim can be found at the foundation of modern black—and American—culture; his life and works have inspired the “blaxploitation” subgenre, rap and the gangsta rap subgenre, and icons like Ice-T, Ice Cube, Snoop Dogg, Dave Chappelle, and Jay-Z.

Literature professor Justin Gifford’s decade of research into the life of Robert Beck culminates in a colorful and compassionate biography of one of the twentieth century’s most influential writers and captivating characters. Through interviews with Beck’s family and research into archival material such as prison records and FBI files, Gifford explores the sexual abuse and racial violence that transform a young Robert Beck into Iceberg Slim, his cold-blooded history as a pimp, his transformative writing, and the subsequent exploitation by publishers that left Beck penniless.

Now featuring a foreword from Michael Eric Dyson, Slim’s story is not for the faint of heart but Gifford tells it without flinching. And in doing so, he creates an honest and engaging profile of one of American literature's most unique—and largely overlooked—figures.