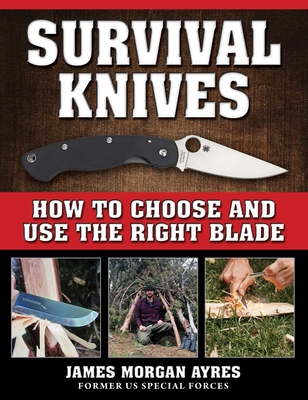 How to Choose and Use the Right Blade

Some survival guides explain the basics of how to make primitive tools. But do you know how to actually successful hunt with spear, throwing stick, bola, or primitive bow? Making tools that you do not know how to hunt with will not get you to meat. If you’re hunting with primitive weapons, especially crude survival weapons you’ve made in the field under actual survival conditions, you must adapt your strategy to the weapons available or go hungry.
Author James M. Ayres grew up in the Midwest hunting squirrels, rabbits, and other small game with bows, spears, atlatls, and bolas he made myself. He has hunted with bow, spear, net, and other primitive weapons with the Lacandon in Yucatán, the Igorots in the Philippines, the K’iche’ in Guatemala, the Sasak in Indonesia, and others. In Survival Knives, he shares his knowledge so you, too, can survive using such tools and weapons.
It’s not enough to have a knife and know how to make basic hunting weapons. That’s craftsmanship—not survival. Nor is it enough simply to have a knife when trapped in an emergency situation, like a collapsed building. You need to know how to conserve your knife and use it properly to escape so that it will not break and you are not injured.
Learn how to use survival knives, and how to use the tools and weapons you can make with the knife—not only in wilderness, but also in urban areas, foreign countries, and disaster zones such as earthquakes, floods, fires, and civil insurrections.

James Morgan Ayres served with the 82nd Airborne and the 7th Special Forces Group (Green Berets); he has also worked as a private contractor with various US government organizations. He graduated from the US Army’s jungle survival school in Panama and the winter survival school at Camp Drum, New York. During the past decade, Ayres has written dozens of articles and stories for Blade Magazine and the Knives annuals. His books include The Tactical Knife and An Introduction to Firearms. He resides in Southern California.
or support indie stores by buying on
Copyright © 2020 American Booksellers Association