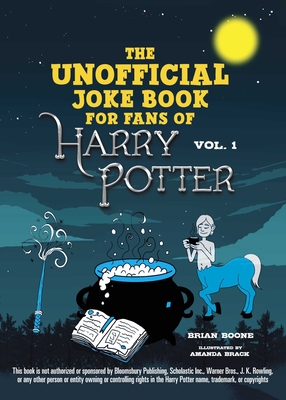 The Unofficial Joke Book for Fans of Harry Potter

Featuring hundreds of jokes and over 50 illustrations, this collection provides endless amounts of fun and clean humor for readers and fans of J.K. Rowling’s bestselling wizarding books.

Muggle world got you down? Dark Lord actively trying to end you? Horcrux fell into the abyss that is between your couch cushions? Need some laughter but haven’t learned the tickling charm yet? Don’t worry; The Unofficial Harry Potter Joke Book is here to relieve some of the daily stresses that accompany a life of witchcraft and wizardry. “Tom” Riddles, knock-knock jokes, and plenty of puns:

For fans of the Harry Potter series, this gut-busting compendium of charming and magical quips pokes fun at some of your favorite characters and scenes from the books and movies. The jokes highlight some of the major characters, including Harry, Hermione, Ron, Hagrid, Dumbledore, and Voldemort, as well as many magical elements from the wizard world!