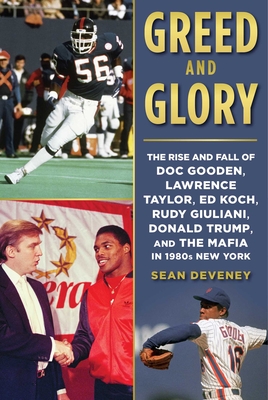 On October 28, 1986, just one day after winning one of the most thrilling World Series in history, the New York Mets were feted by more than two million fans with a parade through the city. In news accounts of the event, there was a small aside, as this one in the New York Times: "Notable in his absence was the pitcher Dwight Gooden, who Mets officials later said had overslept."

For Gooden, his postgame champagne celebration kicked off a cocaine binge that took him to a club in Long Island and wound up with him, wired, watching his teammates roll through the streets as he sat with strangers in a public housing project.

Such were the 1980s in New York City, a gilded era buttressed by fast money from a real estate boom and the explosion of Wall Street wealth. The Mets and Giants, bolstered by lightning-rod personalities like Gooden and Lawrence Taylor, brought the city sporting glory while its celebrity wealthy added a tabloid-friendly touch of intrigue and national envy. Iconoclastic real estate developer Donald Trump gained national celebrity for his deal-making skill and the flaunting of his outsize ego. Even mayor Ed Koch had gained coast-to-coast fame and mention as a potential future president.

Beneath the opulence was a tenuous foundation, one that collapsed spectacularly over the last half of the decade. Away from the cameras focused on the city's nouvelle riches, New York was beset by crisis after crisis--homelessness, AIDS, crack cocaine, organized crime. The swell of outrage over the unwillingness of the city elite to address those problems took years to finally reach a tipping point.

Through interviews and detailed research, Greed and Glory gives the narrative of New York during these times, tracing the arc of its sports heroes and celebrities of that era, from their memorable highs to their ultimate lows.

Sean Deveney has been a writer and editor at Sporting News since 1999, covering all aspects of sports. He has authored four books, including The Original Curse, Facing Ted Williams, and Before Wrigley Became Wrigley.
Loading...
or
Not Currently Available for Direct Purchase