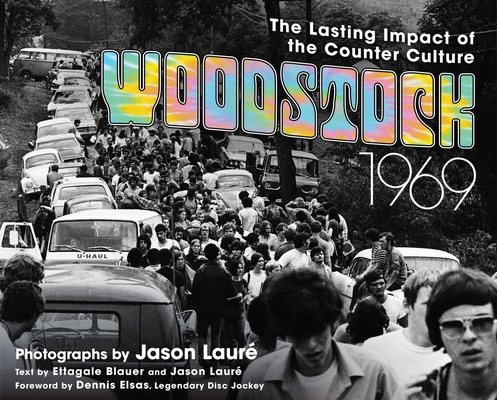 The Lasting Impact of the Counterculture

“Unique and highly personal. The photos are beautiful and vivid, providing an eyewitness account of this remarkable moment in time. “—Dennis Elsas, WFUV-Radio and Sirius XM On-Air Personality, from his Foreword

Fifty years have passed by the impact of the Woodstock music festival—three days of music and love” lives on as a memory, as an inspiration, and a turning point in American history. Woodstock 1969 stands out for its singular voice.

Photojournalist Jason Lauré followed his unerring instinct for being in the right place at the crucial moment. He and coauthor Ettagale Blauer trace the historic events that preceded the festival and then envelop the reader with photographs of the headliner rock stars that performed during the landmark three-day concert including The Who, Janis Joplin, Grace Slick of Jefferson Airplane, and Santana.

Threading his way back and forth from the stage, through a sea of happy audience members, Jason Lauré photographed the communal life that was an essential part of the phenomenon that was Woodstock. Never intrusive, yet working close-up, he managed to capture these innocent moments in the pond and in the woods with the same compassion and intimacy he brought to his coverage of all the crucial events of the era. After Woodstock, he photographed such legends as Jimi Hendrix, Tina Turner, and Jim Morrison of the Doors.

Woodstock 1969 gives the reader an appreciation of the lasting impact of the festival, showing the way it changed the lives of all who experienced it. It served as the high point of the counterculture that started in earnest in the Summer of Love, and also as a leading influence in the decades that followed. The book concludes with a look at Woodstock's lasting legacy, from Greenwich Village and the rock scene of the Fillmore East to the establishment of Earth Day and the burgeoning environmental movement.

Praise For Woodstock 1969: The Lasting Impact of the Counterculture…

“Jason Lauré’s photographs and coauthor Ettagale Blauer’s commentary present an approach to these historic events which is unique and highly personal. The photos are beautiful and vivid, providing an eyewitness account of this remarkable moment in time. The festival and the era clearly made an impact on Jason and the book offers us the opportunity to share his experience.” ?Dennis Elsas, WFUV-Radio and Sirius XM On-Air Personality, in the Foreword

“Lauré and Blauer paint an evocative image of the 1960s in all its creative, dynamic, and messy glory. From Greenwich Village to the Haight Max Yasgur’s farm to Bill Graham’s Fillmore East, they capture the cultural churn of a time and place when the world was begin transformed, minds were being expanded, and history was being made.” ?Andrew Berman, Executive Director, Greenwich Village Society for Historic Preservation

“These pictures and words beautifully capture and evoke the most poignant moments of what Hunter S. Thompson called ‘America’s High-Water Mark.’ Lauré traversed America in the mid and late 1960s as the epitome of the swash-buckling photojournalist, capturing the most seminal moments of the counterculture and the music that defined it. He and Blauer offer us a very special gift, a visual and poetic permanent record of the music, people, and events that defined an era.” ?Gabrial Brodbar, Executive Director of the NYU Social Entrepreneurship Program and Founder of Catskill Carriage

“Jason Lauré and Ettagale Blauer, have, with dramatic clarity, put together the complete visual experience of the most important event of the Sixties, Woodstock. This concise, thoughtful collection of photos and prose allows us to see and feel how this organic movement grew. Via these intimate images, the essence of this indomitable movement is captured and crystalized like never before. Their images and first-hand accounts have taken us back in riveting detail and allowed the reader to experience this incredible psychedelic movement as true participants. No drugs needed!” ?Frank Meo, Curator, thephotocloser.com

Jason Lauré moved to San Francisco in the famous "Summer of Love" and started photographing the counterculture. He attended Columbia University and worked at the New York Times before serving in the United States Army in France, where he attended the Sorbonne. He was a finalist for a Nieman Fellowship at Harvard University and was nominated for a Pulitzer Prize for Feature Photography for his work in Bangladesh. His photographs have been auctioned at Sotheby's and featured at the Hard Rock Cafe and at the Bethel Woods Museum. Jason lives in Cape Town, South Africa and in New York City.

Ettagale Blauer is a full-time writer with expertise in Africa, diamonds, fine jewelry, and design. She is the author of several books, including African Elegance and a series on African countries. One of the books she coauthored with Jason Lauré, Joi Bangla!: The Children of Bangladesh, was a National Book Award finalist. Her work has appeared in several magazines including Rapaport and Art & Auction, and she has lectured at New York University and led wildlife and gem safaris in Africa. Ettagale lives in New York City.
Loading...
or
Not Currently Available for Direct Purchase