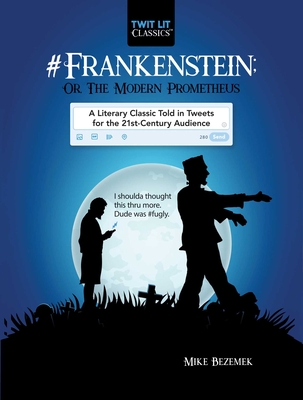 #Frankenstein; Or, The Modern Prometheus

Few classic works of literature have excited such enduring popular interest among the general public as Frankenstein. But suppose the characters—Victor Frankenstein, Captain Robert Walton, and, yes, even the “monster”—had shared their tale in tweets? #Frankenstein; Or, The Modern Prometheus in Tweets hilariously reimagines Mary Shelley’s classic gothic novel in about two hundred tweets, each 280 characters or less.

@frankendoctorvictor:
A rainy November night, under a dying candle, I infused the spark. A gasp! A convulsion of limbs! A yellow eye opened. ;P WTF had I done?
In this witty abridgment, Victor Frankenstein’s quest to create a sentient being is retold with the occasional emoji. The plight of his monstrous creation is presented with internet acronyms. And Captain Robert Walton ponders the blinding power of ambition with hashtags.
Including an appendix that presents the original passages upon which each tweet is derived, #Frankenstein offers modern readers an entertaining and accessible companion to a great American classic.

Praise For #Frankenstein; Or, The Modern Prometheus: A Literary Classic Told in Tweets for the 21st Century Audience (Twit Lit Classics)…

“A romping tragicomedy with @frankendoctorvictor, @iamnotttamonstar, and more. . . . Maybe if I’d been able to experience the classics via hashtags and emoji, I might have read more in high school!” —Ian Doescher, author of the William Shakespeare’s Star Wars series

“A delightful re-imagining of what the characters from Frankenstein would be like in the 21st century. #awesome” —Emily Robbins, author of A Word for Love

Mike Bezemek is a writer, photographer, editor, and teacher. He’s contributed work to a variety of publications, including Canoe & Kayak Magazine, Bull, Hobart, The Morning News, FalconGuides, and elsewhere. He’s not the Mike Bezemek that lives in Texas. He’s the other one.
Loading...
or
Not Currently Available for Direct Purchase