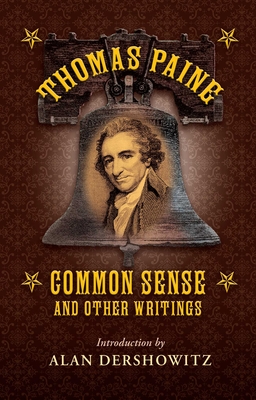 Seemingly as important today in the time of Donald Trump and fakes news as it ever has been, here is Thomas Paine’s timeless writing on liberty and living a democratic life. With an introduction of Harvard scholar and celebrated lawyer Alan Dershowitz.

Thomas Paine is most famous for writing Common Sense, a pamphlet distributed during the American Revolution advocating for colonial America's independence from Great Britain. Now, collected here in a beautiful gift book volume, are excerpts from this important historical American document, as well as several of his other writings. This volume is introduced by Alan Dershowitz, Professor of Law, Emeritus at Harvard Law School and a noted civil liberties advocate.

Paine believed in more than just freedom in the form of revolution and overthrowing governments. He also believed in freedom from oppressive and organized religions and monopolies.

Included in this edition are passages taken from The Age of Reason and The Rights of Man, as well as letters to George Washington, Benjamin Rush, and Samuel Adams, and pamphlets such as "The American Crisis" and "Agrarian Justice”

Thomas Paine was an English-American political activist, philosopher, political theorist, and revolutionary.
Loading...
or
Not Currently Available for Direct Purchase